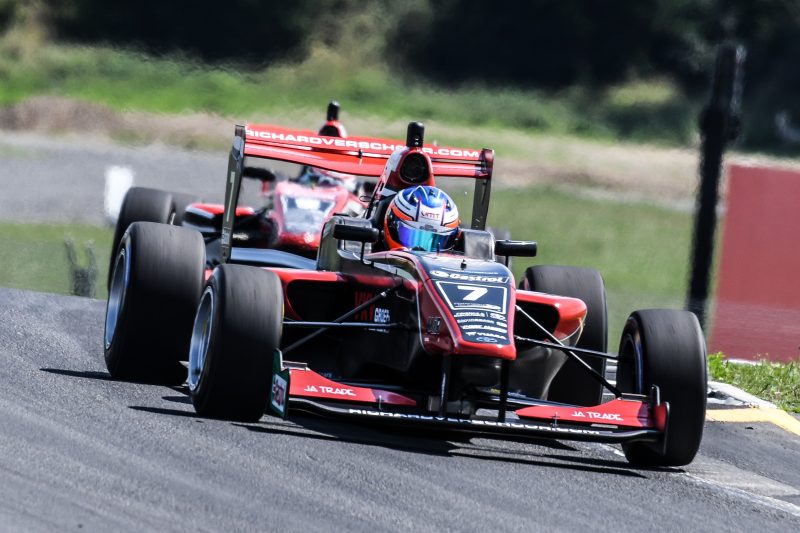 Verschoor (Netherlands), who qualified on pole for both Race 1 and tomorrow’s New Zealand Motor Cup race, headed the field into the first corner as the top three made a fairly even start.

The top two soon pulled away from the field but didn’t really engage each other until a mistake in the latter stages allowed Armstrong to close up on his M2 Competition team-mate.

“I didn’t push from the start,” explained Verschoor.

“There were a lot of marbles (small pieces of rubber) out there and I didn’t want to make a mistake.

“I made one little mistake and then he was right behind me.”

However, in relatively high temperatures at the Waikato circuit, Armstrong had to back off to reduce his car’s water temperature and Verschoor went on to win the 20-lap contest by nearly four seconds.

Correa also faced a challenge late in the piece from Robert Shwartzman but held on to the final podium position from the Russian, with last start winner Clement Novalak (Great Britain) rounding out the top five.

New Zealanders further back in the top 10 were Reid Harker (Auckland) in sixth, Taylor Cockerton (Pukekohe) in eighth and Brendon Leitch (Invercargill) in ninth.

Leitch, who was involved in one scrap or another for seemingly the whole race, threw his car up the inside of Charles Milesi (France) to make the move with two corners remaining.

Armstrong now holds a slightly extended points lead over Shwartzman as the halfway round of the series concludes with two more races tomorrow.