Clement Novalak pulled away at the start of Race 3 pic: Bruce Jenkins

Clement Novalak has won the Spirit of the Nation Trophy while Juan Manuel Correa also notched up his first race win in Round 2 of the Castrol Toyota Racing Series at Teretonga Park.

Novalak (Great Britain), in just his second race weekend out of karting, started the feature race from the outside of the front row and made a strong start before leading all 25 laps.

His margin over Marcus Armstrong (Christchurch) trended upwards to a peak of 1.4s with four laps remaining before the Giles Motorsport driver cruised home. 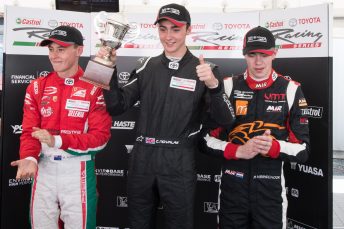 “I am lost for words,” said Novalak.

“Everything went very well, although the laps to go seemed to go down so slowly when you are in the lead.”

Armstrong occasionally came under pressure from Richard Verschoor but eventually took a fairly comfortable second position, ahead of the Dutchman.

The bulk of the action took place on the cusp of the top 10 with Charles Milesi (France) and Taylor Cockerton (Pukekohe) in particular putting on an entertaining scrap, finishing 11th and 12th respectively.

Novalak followed on-track after some wheel-banging with James Pull (Great Britain) but a post-race penalty for an obvious jumpstart put him back to fifth, behind Pull, Armstrong, and Shwartzman.

Verschoor, who won Race 1, pulled off the move of the day when he reclaimed sixth position from Cameron Das (United States) on the outside of the Loop (Turn 1) with three laps remaining.

Armstrong’s consistency earned him another round win, despite this time not winning a race.