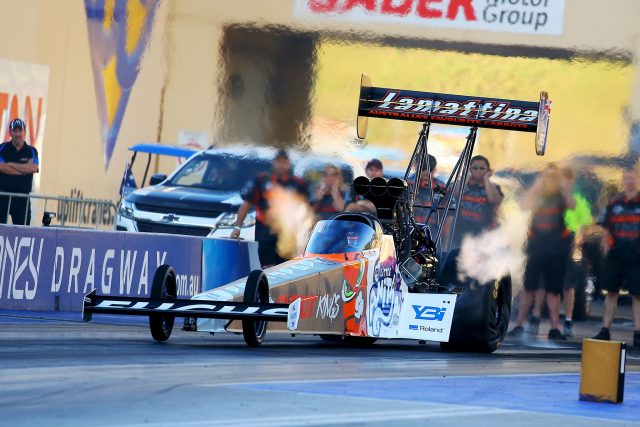 Kelly Bettes has taken her first win in Top Fuel competition during the Santo’s Summer Thunder meeting at Sydney Dragway.

Bettes, who set the pace on the opening night, picked up enough points under the All-Run format to make the trophy race against championship leader Damien Harris.

“I knew we had a good car, I just had to do my job and get it down there,” said Bettes.

“I couldn’t be happier for my team (Lamattina Top Fuel Racing) to take this trophy home to them.”

Harris could only manage a 4.89s with problems in the other lane, but holds on to his series lead after three rounds of 400 Thunder Top Fuel competition.

Bettes moves up to third in the standings with the first win for a woman in 400 Thunder’s top category, while title contender Peter Xiberras experienced a tough night.

Pro Slammer went the way of Paul Mouhayet, who beat John Zappia in a final round encounter which would determine who left Western Sydney with the series lead.

In Top Bike, Chris Matheson scored maximum points to stretch his advantage at the top of the standings.

Pro Alcohol saw the top two go head to head in the final for the second consecutive round, with Russell Mills leaving a red light to hand another victory to Steve Reed.

400 Thunder moves to the Perth Motorplex for Round 6 on March 3-4, with Pro Alcohol, Pro Slammer, and Top Bike in action.