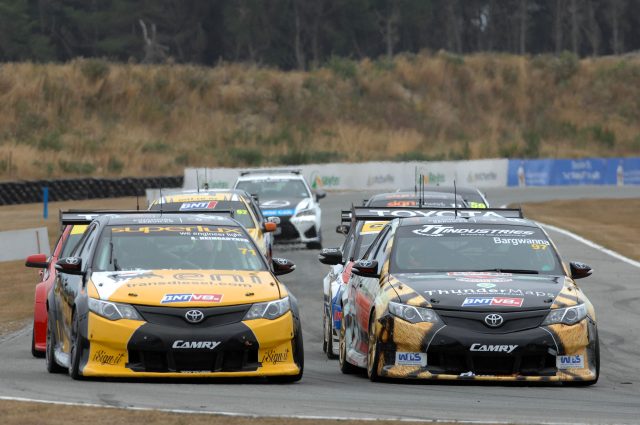 Andre Heimgartner has extended his BNT V8s championship lead on a mixed weekend for Jason Bargwanna and Nick Ross at Teretonga Park.

Bargwanna (#97 Tiger Camry) beat Richards Team Motorsport team-mate Heimgartner (#71 Superlux Camry) by exactly a second in Race 2, having enjoyed a lead around that magnitude for the entire 11-lap affair.

Ross (#007 Total Altima) stuck with Heimgartner around the flowing Invercargill circuit but couldn’t make his way past as he finished third.

The majority of the action in the reverse grid/handicap Race 3 came on the first of 14 laps, initially when Bargwanna and Heimgartner traded paint as they attempted to hurry through from the back of the field.

Bargwanna was first to clear Hughes, only to be taken out by him at the Elbow (Turn 8) moments later. 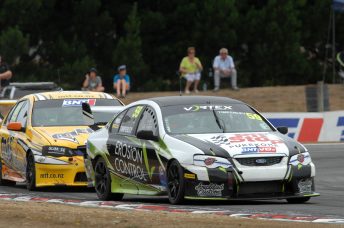 Brock Timperley (#59 Erosion Control Falcon) led the race until Ross rose to the top on Lap 9.

Heimgartner took another two laps to clear the Class 2 cars, by which time Ross had already moved more than seven seconds clear and would be unchallenged to the chequered flag.

The result was a complete turnaround for the Cambridge driver after a wing failure pitched him into the tyre wall a day earlier.

Bargwanna also picked off Timperley on the final lap as they finished third and fourth respectively.

Hughes’ error was punished not only with a right-front puncture but also a drive-through penalty, the end result being a last-placed finish in the nine-car field, two laps off the lead.

Heimgartner, victorious in Race 1, won the round to and stretched his championship lead.

“Overall it was a good weekend,” he said.

“We were pretty speedy all weekend, got another pole, three podiums and extending the championship lead is another positive.

“The New Zealand V8 title is a good thing to have under your belt and it doesn’t hurt your CV to have it on there.

“I’m definitely focused on it over the next two rounds.”

The penultimate, fifth round takes place at Circuit Chris Amon (Manfeild) on February 10-11.