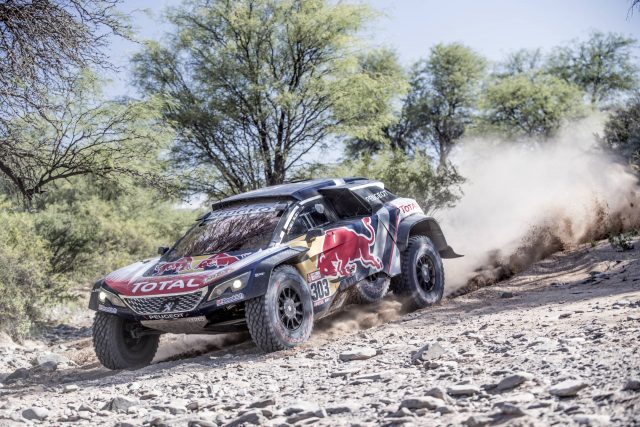 Carlos Sainz’ grip on the 2018 Dakar Rally has tightened after Team Peugeot team-mate and nearest rival Stephane Peterhansel crashed on the penultimate stage.

Peterhansel (Team Peugeot, French) hit a tree 78km into the first part of the day’s timed running and while his pace was good after the neutralised zone, the damage was done having already lost nearly an hour.

However, Peterhansel’s misfortune means that Sainz (Team Peugeot, Spanish), nearly 20 minutes slower than Al-Attiyah in sixth position on the day, actually extends his lead over second position overall to over 46 minutes.

Lucio Alvarez (Overdrive Toyota, Argentinean) was 11:16s slower than Al-Attiyah in second for the stage, while Peterhansel was classified 20th and dropped to fourth overall.

Bernhard Ten Brinke (Toyota Gazoo, Argentinean) held the lead at the neutralised zone but suffered a mechanical failure soon into the second part of timed running and has withdrawn from the rally.

The final stage on Saturday (local time) takes the field for a 120km timed loop around Cordoba, Argentina.