Price aiming for second ahead of final day of Dakar

Price aiming for second ahead of final day of Dakar 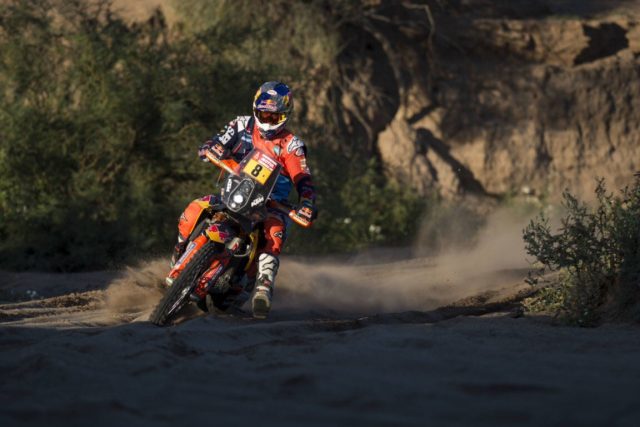 Back-to-back stage winner Toby Price has identified second position overall as his aim for this year’s Dakar Rally, which draws to a close from late tonight (AEDT).

He also gained just over two minutes on Kevin Benavides, who at one stage threatened to snatch the stage win from Price, to be 5:14s off second position overall.

The final stage of the rally, however, is a 120km special around Córdoba, meaning that even overhauling Benavides will be a hard ask without a significant issue for the Argentine.

“It would be nice to beat Kevin,” said Price.

“That’s the aim and the goal but Kevin’s riding really well, really strongly and really fast at the moment.

“He’s a little guy, so the bike’s got really good top-speed, so I’ll have to try and beat him on corner-speed.

“We’re just trying to mow down as much time as we can and fingers crossed it gets us into second, but if not 12 weeks ago I would have laughed and said I wouldn’t have been here on the starting line.

“If anyone said I was going to maybe try and push for a podium finish I definitely would have laughed pretty hard then.

“We’ll see. It would be nice to try and get onto the second step. At the moment, third is not looking too bad, but it’s not over yet.”

Price at least consolidated his hold on a podium position by beating Antoine Meo, with 22:32s now separating him from the Frenchman in the general classification.

The New South Welshman bagged a first stage win of the rally two days earlier, and with the cancellation of Stage 12 due to weather concerns has now gone two in a row.

“This morning we had a couple of tricky bits, but it was a good fast track with really rough sections, so I pushed pretty hard there and made a little bit of time.

“I’m not too sure about the last bit, but we made a few small mistakes and went off track a bit.

“I felt good, I pushed hard and I made it to the finishing line so I’m happy.”

Benavides, too, now sees the Bikes division as a race for runner-up honours.

“I managed to regain a bit of time on the second part, because Toby had distanced me on the first section,” said the Monster Energy Honda rider.

“Unfortunately, I had a little fall about 60km from the finish, but it didn’t set me back much.

“We are very close in the general standings, so I’ll have to keep my eye on him.”