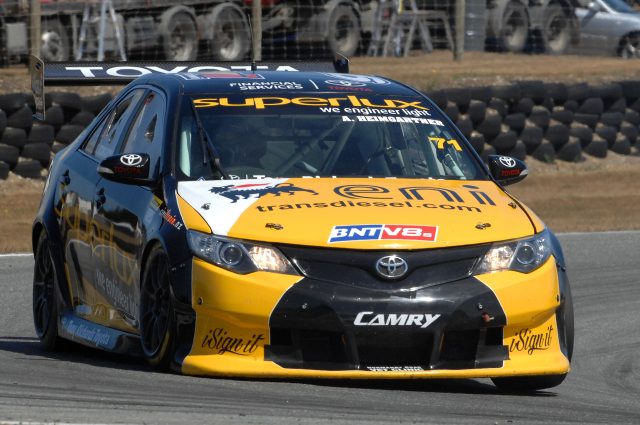 Andre Heimgartner’s winning run has continued in Race 1 of Round 4 of the BNT V8s at Teretonga Park in Invercargill.

Having maintained his status as the only outright pole-sitter all season, Heimgartner led the field away from the first corner in the #71 Superlux Camry and was never headed.

He was 1.5s ahead of Bargwanna (#97 Tiger Camry) when the Safety Car was called for Ross’s incident off the end of the Main Straight.

The #007 Total Altima suffered a wing failure which left the Cambridge driver unable to make the turn at the Loop (Turn 1), instead running through the gravel trap and nosing into the wall.

“The wing let go, which at the time I wasn’t aware of, so when I went to brake I had no downforce,” explained Ross.

“From there I was just a passenger.

“We have all night to fix the car, we’ll see how bad the damage is and aim to be back out tomorrow.”

When the 12-lapper restarted with one lap remaining, Bargwanna dropped a wheel off entering the Main Straight and ensured Heimgartner a comfortable final tour.

“It was a pretty straight forward race for me; I just put my head down when I was out the front and looked after the tyres,” said Heimgartner.

“The car has been running well lately, and I think I’m driving it a lot better than earlier in the season.

“I’m learning more about the way the car works and what it needs.”

Matthew Tubbs (#42 JumpFlex Commodore) nabbed Hughes (#84 Hamilton Asphalts Commodore) for third upon the restart but ran off at the final corner and was instead last home of the eight finishers.

Jack Smith failed to appear beyond practice due to an engine failure for his #85 Pilot Brewery Commodore.