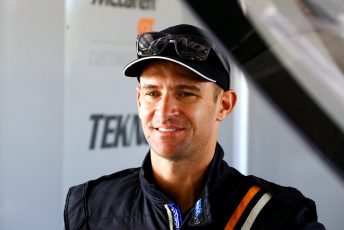 Will Davison will join Team WRT in a Pro-Am class Audi for next month’s Liqui-Moly Bathurst 12 Hour.

The Belgian squad confirmed it will field two current-spec Audi R8 LMSs in next month’s event, with a car in both Pro-Pro and Pro-Am classes.

Last year, Davison was set to race a McLaren 650S GT3 before it was ruled out of the race following a crash for co-driver Ben Barnicoat at the Chase during qualifying.

“I’m really excited to be doing the race again. After last year’s disappointment I was really keen to get something happening,” Davison said.

“I was so disappointed because I’d qualified the car second after only doing a few laps. However, unfortunately the accident meant we weren’t able to go racing.”

Davison will join Paul Dalla Lana, Pedro Lamy and Mathias Lauda in what will be his first appearance in an Audi.

“Mathias Lauda is a very good friend of mine from when we were racing A1GP together,” Davison explained.

“I heard from him and then the WRT guys and it all came together. It’s certainly going to be a pretty exciting team to be part of.

“All the dialogue I’ve had with them shows that they do things very professionally and it will be good to be part of team like that.

“They’re a combination that is very experienced and do a lot of racing together,” he added of his co-drivers.

“It’s really nice to be added to that line up and help bolster their chances.

“I’ll try and help them with my experience of the mountain. I think if we keep it clean, keep our heads we will hopefully feature in the results at the end of 12 hours.”

The 2018 event marks WRT’s first appearance at Mount Panorama, and comes off the back of victory in the Blancpain GT Series Sprint Cup.