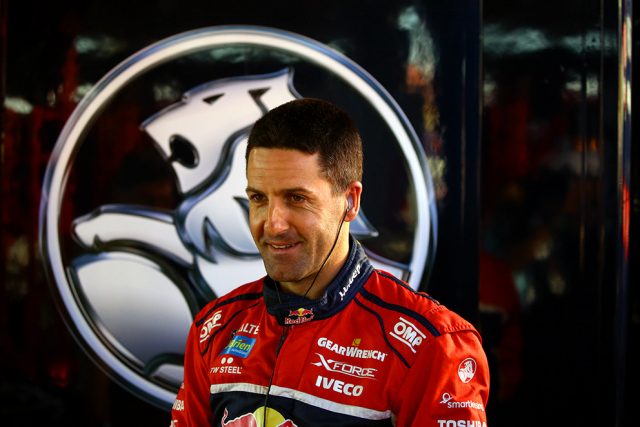 Jamie Whincup has agreed a one-year contract extension with Triple Eight Race Engineering, meaning that all three of its drivers are now contracted to the end of 2019.

Whincup’s new deal was announced in conjunction with the launch of the team’s Red Bull Holden Racing Team ZB Commodore on Sydney Harbour.

“I’ve been with Triple Eight for a long time now and we’ve achieved a lot together, but at the same time still feel we have so much more to prove,” he said.

“I’m rapt to be staying within the family for at least the next couple of seasons and massively looking forward to the challenges that the new Commodore and then the V6 engine next year will present.”

The news comes after Whincup recently told Speedcafe.com’s Up Front With Foges that he intended to stay for “another one or two years” beyond the three-year deal which runs out at the end of this season.

A contract for 2019 has technically not yet been signed, with the 34-year-old explaining that he has a verbal agreement with Triple Eight boss Roland Dane.

“You don’t want to go in to one year without knowing what you’re doing the following,” Whincup added to Speedcafe.com at the launch event.

“At some stage in a few months we’ll probably do the paperwork but that’s not important.

“We’ve both agreed that we’ll do ’19 and it’s just been a pleasure doing business with Roland and I’m looking forward to another big year.”

Whincup has achieved all seven of his championship wins and four Bathurst 1000 victories with Triple Eight, where he will have been domiciled for 14 years by the end of his new contract.

He made his Supercars debut with Garry Rogers Motorsport in the 2002 enduros and became full-time with the team the following year.

A poor season saw him dropped in favour of Cameron McConville, and Whincup raced with Team Perkins Racing at Sandown and Bathurst.

He spent a single year at Tasman Motorsport in 2005, the highlight of which was undoubtedly a second place finish with Jason Richards in the Supercheap Auto Bathurst 1000.

Whincup’s performances in the small Holden outfit caught the eye of Dane, who has employed the Melbourne-born driver ever since.

His new agreement mirrors that which was announced for Shane van Gisbergen last November.

In conjunction with the two-year extension announced for Craig Lowndes earlier last year, it means that the contracts of all three Triple Eight driver run out at the end of 2019.