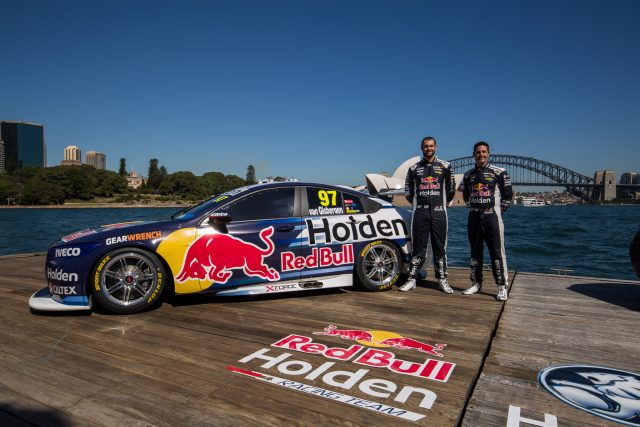 The Red Bull Holden Racing Team has pulled back the covers on its 2018 Virgin Australia Supercars Championship challenger.

Unveiled at an event at Farm Cove on Sydney Harbour, the all new livery marks a departure from the traditional blue carried by the team since 2013.

It also represents the first official appearance of the Holden Commodore in ZB configuration which all Holden-shod teams are set to field in 2018.

Click here to view an extended photo gallery from the launch.

“We had a full on year last year, not only designing and building the car but also trying to win the championship,” said Triple Eight Racing Engineering boss Roland Dane.

“(It was) a hard year last year, (it will be) another hard year this year, but I look at the end result and we’ve got one of the most dramatic cars that we’ve come up with between the Holden design department and our aero guys.”

Red Bull HRT has won the last two Supercars championships courtesy of Jamie Whincup last year and Shane van Gisbergen in 2016, though lost out on the teams’ championship to Shell V-Power Racing in 2017.

With seven titles to his name, Whincup remains hungry for the coming season, believing the ZB Commodore to offer a step forward over the VF.

“You can’t underestimate the work that’s gone into, in particular, the aero package,” said Whincup.

“It’s been going on for months and months, and the engineers at Triple Eight have done an awesome job.

“We’re fairly simple people. We go out there to win; that’s the goal.

“We had a great year last year, but a few things got away from us, and there’s plenty of motivation this year to grab back the teams’ championship.”

Having been in contention for the title until the final round, van Gisbergen is impressed by the look of the new car, and hopes it can see him repeat his title winning campaign of 2016.

“It’s amazing; when I walked into the photo shoot the other day and saw it for the first time, I was amazed at how good it looked,” said van Gisbergen.

“The splitter looks really aggressive and the big wing on the back, it’s really completed the car.

“I can’t wait to drive it in the coming weeks and see how it goes on track.

“Last year we had awesome pace, just made a few too many mistakes, driving- and engineering-wise,” he added.

“Hopefully this year we will learn a new car, a new tyre again, and get it all together again.”

The 2018 Virgin Australia Supercars Championship gets underway with the Adelaide 500 on March 1-4, following the season launch and official test in Sydney next month.