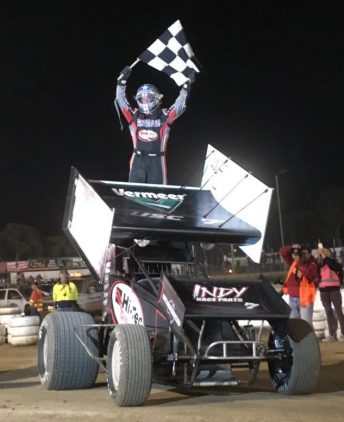 Evergreen racer Robbie Farr’s dream of winning the Grand Annual Sprintcar Classic is alive after a perfect preparation in Geelong.

Farr took out his fifth President’s Cup in spectacular fashion with a final corner pass on American Terry McCarl at Avalon Raceway.

It was the perfect warm up for the 44-year-old, who this weekend will try and take out the one big prize in Australian speedway to elude him, the time-honoured Classic.

“I’m super happy to get the win; it was a wild finish and I think the fans would have loved it,” Farr told Speedcafe.com.

“Our form is solid and it gives us confidence; of course l‘d love for it to continue on the weekend at Warrnambool.

“We’ve had plenty of bad luck at the Classic; I’d love for it to end this weekend.”

The hard luck story of last night was defending Classic champion James McFadden, who led from pole and dominated the feature only to collide with a backmarker on the final lap.

It relegated McFadden to the back of the field and set up the grandstand finish between Farr and McCarl.

They duked it out with a thrilling final lap with McCarl taking the lead only for Farr to grab him out of Turn 4.

“I must say I do feel for James. He had that race won, but we’ll take the trophy,” said Farr.

The monster sprintcar festival continues tonight at Mount Gambier with scorching temperatures forecast for the King’s Challenge at Borderline Speedway.

The event takes on added significance a week out from the Australian Sprintcar Championships at the same venue.

A record field of 111 cars then heads for Warrnambool on Friday night for the three-night Grand Annual Sprintcar Classic at Premier Speedway.