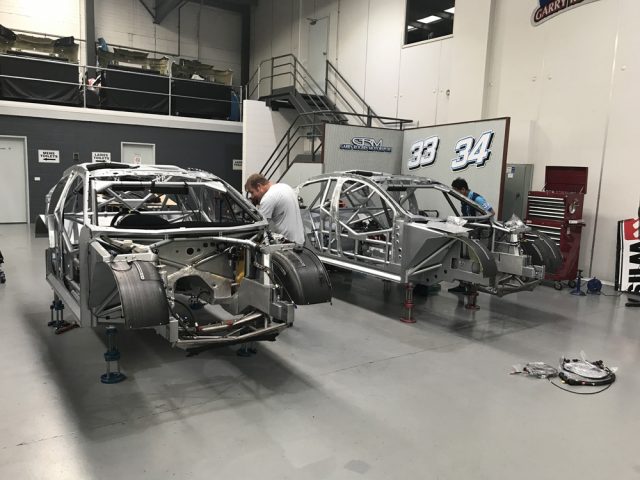 As the category transitions from the Holden Commdore VF to ZB, GRM has elected to build two completely new cars for the coming season.

Pending the arrival composite panels panels, which are due from Triple Eight later this week, the new cars are already largely complete.

“The fabrication work’s been done, the fit-out on one of the chassis is totally complete, one’s probably got another couple of days to go” Barry Rogers told Speedcafe.com.

“Basically (we have) two shells, chassis, sitting there all fitted out ready to go, to get the panels put on.”

According to Rogers, the panels are the final piece of the puzzle left, aside from the installation of the running gear.

The team has already received information from Triple Eight which allowed it to manufacture and install the mountings for the new bodywork.

“There was CAD that came from Triple Eight, so all the mountings that are fabricated into the body are all there,” Rogers explained.

“It shouldn’t be too much of an issue once we get the panels, they should all just go onto the spot that’s allocated to them.

“Really, on the panels, it’s only a day’s work, if that; it just looks nice when it’s a complete car,” he continued.

“When you see them sat there as a bare chassis it probably looks like half a car, but 99 percent of the work is done at this stage – it’s just getting those final things to make it look pretty.”

Once the two ZBs are complete, Rogers is tossing up whether the team upgrades one of last year’s VFs to act as a spare car.

“We’ve obviously got two brand new ZBs built, so they’re brand new from the chassis up, and then we’re thinking once we get over this bit of work we might strip back one of the VFs.

“We’ll keep one of them, but we might strip one of them back and de-panelise it and turn it into a spare ZB chassis.

“It won’t be a complete race car, we’ll just build it up as a chassis so, if by chance we needed one during the year, it’s there.”

Once complete the team plans a shakedown test at Winton on February 14.

It will then continue on to the 2018 season launch and official pre-season test at Sydney Motorsport Park on February 15 and 16.