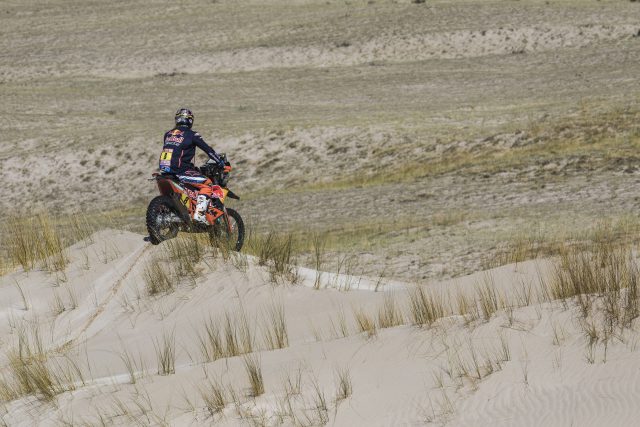 Toby Price admits that he is now only an outside chance to win the 2018 Dakar Rally after a costly navigational error on Stage 10 from Salta to Belén in Argentina.

Price was one of four contenders to venture significantly away from the correct route at the start of the second section of the special stage, having been second-fastest to the mid-session break.

The Red Bull KTM Factory Team rider dropped one position to fifth in the general classification, but more significantly lost over 40 minutes to the rally lead.

“It’s one of those days you want to forget. A bit tough, but that’s the way it is,” lamented the 2016 Dakar winner of his ride.

“I’ve just got to try and see what the rest of the week will bring now.

“It was a bit of a hot one and I didn’t have much fluid, so I’m a little bit drained and a bit dehydrated.

“The notes pretty much looked like they all said 150km and the rio (river) we got into started at 150 km. We thought we’d got it right, but obviously not.

“I don’t know; the road book’s a bit average at the moment but that’s the way it is.

“For us it’s pretty much done. We’ll just keep plugging away each day and see what happens.

“You never know, but it’s not looking too good, so that’s the way it is.”

Walkner, who won the stage and now has a 39:42s lead over next-best Joan Barreda Bort in the general classification, played down the magnitude of his advantage.

The Austrian cited the events of the rally to date to suggest that the title is still wide open for several competitors.

“When we spoke about the rankings yesterday, I was almost out of it,” he said, despite being 6:34s off the pace at the time.

“But this is the Dakar and every day it can change a lot.

“Of course I think I can win, but there are six or seven other riders who can win it and there is still a long way to go.

“We’ve seen how quick it can change.”

Walkner was in fact 6:43s behind then-stage leader Kevin Benavides at the mid-session break, but pulled well clear in the second portion of the day’s timed running in part due to avoiding his rivals’ navigational troubles.

It then appeared that Adrien van Beveren would take stage honours and hold onto his overall lead until the Frenchman crashed his Yamaha, breaking his right collarbone and sustaining thorax and spinal injuries.

“It was a really tough and long stage,” he recalled.

“After the first part, when I saw Kevin was six minutes in front, I said ‘Okay, we can’t go as fast all stage with this tricky navigation.’

“So I stayed at my pace and it did not work so bad.

“It was really at the limit because it’s so hard to follow the course and all these small rios, but in the end it was a really good day for me I think.”