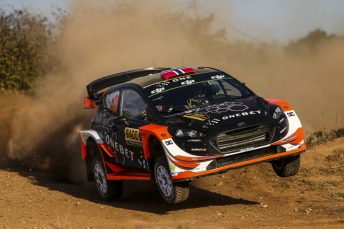 Mads Ostberg could keep his Ford Fiesta World Rally Car as a backup should he fail to secure a deal with Citroen beyond Rally Sweden.

Announced as part of Citroen’s WRC 2018 squad last week, Ostoberg has a single-event deal to drive a C3 in Sweden next month.

He spent last season as a Ford privateer and though he has put his Fiesta up for sale, he is still using it on this weekend’s Saturday’s Sigdalsrally in Norway.

“I need all the driving I can get, so even though I have this agreement with Citroen, I will use the Fiesta this week,” Ostberg told Autosport.

“My Adapta team Fiesta has been at M-Sport having the upgrades fitted to turn it into a 2018 car. It was for sale and it still is.

“At the moment my agreement with Citroen is for one event only but I hope, I really, really hope, to make that last longer.

“The Fiesta could be a backup plan.”

Adapta will still enter Ostberg’s Ford in Sweden while he is with Citroen.

Two drivers are in contention for that drive, with WRC veteran Henning Solberg one of them.

Asked about the identity of the other, Ostberg replied: “I’m not going to tell you, but you would be surprised.”

Ostberg will attend the WRC opener in Monte Carlo with Citroen then work with it at its factory before Sweden, where he has taken five podium finishes in the past.

“I’ll go to Monte to meet the guys and get familiar with the team again,” he said.

“Then I go to France to sit in the car, get the seat and the belts right and to learn where the buttons are.

“This is the first step to get back to being a factory driver, that is one of my highest ambitions and I’m working really hard to do that.

“I know what Citroen stands for and this is a great opportunity to join them again – it’s only one rally for the moment, but I will do everything I can to stay inside that door.”