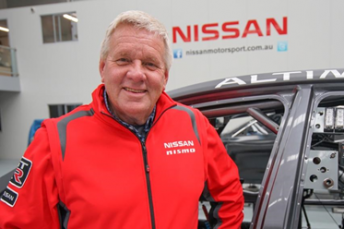 Nissan Motorsport has announced the signing of experienced engineer and aerodynamicist and Nick Ollila as the team’s technical director for this year’s Virgin Australia Supercars Championship.

Ollila commenced his tenure with the Braeside squad just prior to Christmas, following the departure of engineering manager Perry Kapper.

He will oversee engineering operations and attend all race events.

Highly regarded for his four-decade career initially in IndyCar and primarily NASCAR, Ollila expressed his excitement about his new challenge in Supercars.

“This is a new chapter for me, and I can’t wait to get started,” he said.

“We’re not going to go to the racetrack this year with what we had last year. We won’t be better if we do that.

“Now that everyone is back onboard, it’s game on.”

Team manager Scott Sinclair hailed the appointment of the skilled veteran, who has worked for major names in North American motorsport.

“It’s really exciting to have Nick in the team, as his CV speaks for itself,” said Sinclair.

“Nick is across the big picture stuff. He’ll be overseeing development because the team can get stuck in the rhythm of going racing.

“Nick has got a huge amount of experience in areas where we think we’d benefit, and we believe Nick will stamp his name on the car that arrives in Adelaide.

“He has already noted areas where we need to clean up a few things.

“From a race car build perspective, we believe he will have an immediate impact.”

For the first time, no Altima finished on a podium all season, while Michael Caruso was Nissan Motorsport’s best-placed driver in the championship in 13th and Rick Kelly its only pole-sitter (Hidden Valley Race 11).

Ollila was nevertheless bullish about the four-car squad’s chances this year.

“The category is well done, and the cars are tightly controlled – I like that,” he declared.

“The tighter you make the box, the more rules you throw at me, the more fun that I have.

“It forces you to look for that small advantage over the other guy.”

The arrival comes at a crucial time for the Kelly-owned team, whose future as the factory Nissan squad is uncertain.

The four-car outfit is off-contract with the Japanese marque at the end of this season and attempts to secure a new deal will come under the tenure of Nissan Australia’s new managing director Stephen Lester.

Should the Kellys succeed in extending their relationship with Nissan, they would likely do so with a brand new body and V6 twin turbo engine under the championship’s Gen2 regulations.

Ollila’s career began in the early 1970s as a race mechanic and he was a member of Team Penske when it won the 1972 Indianapolis 500.

He rose to the position of chief engineer of The Captain’s NASCAR program, before serving as director of aerodynamics at Roush Racing, then Richard Childress Racing and subsequently the Red Bull Racing NASCAR team.

He was worked as a consultant since 2010 when he established Automotive Aerodynamic Consulting, specialising in CFD and CAD.

“Roger Penske told me once earlier in my career, ‘motor racing is the equivalent to war,’” Ollila recalled.

“You need to approach it with that same level of ferocity.

“You need to be ruthless with your competitors, and you’ve got to challenge the people working with you.”

Nissan Motorsport will begin the season with change behind the wheel as well, with Andre Heimgartner signed as a replacement for the now retired Todd Kelly.

Caruso, Rick Kelly, and Simona de Silvestro continue in the other three Altimas.