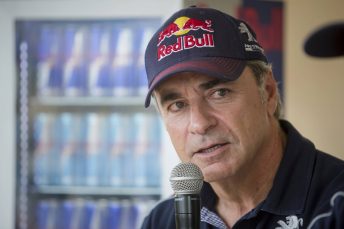 Carlos Sainz has been issued a 10-minute penalty for “potentially dangerous” driving after an incident with a Quad rider during Stage 7 of the Dakar Rally.

Furthermore, Koolen claimed that Sainz did not stop to offer assistance, in contravention of Dakar regulations.

Sainz denied any wrongdoing and instead attributed blame for what he claimed to be a close call to Koolen.

“There are times when I can have some doubts, I know for sure that I didn’t hit any quads,” the Spaniard said prior to the penalty being handed down.

“It was a very muddy area. I warned him with the sentinel and I saw that he saw me and that he went off the road.

“I accelerated and when I did I noticed he lost control because there was a lot of mud.

“Then he came back onto the road and I miraculously avoided him. I was very close, but I didn’t touch him.

“I didn’t hit him and there must be an error. I think it was more his fault than mine.

“My car doesn’t have any impacts and neither does his quad. If I had hit him with the car I’d destroy the quad and we’d be discussing something more serious.”

According to Spanish sports newspaper Marca, Manuel Vidal, FIA commissar of Dakar, told media that Koolen’s complaint had identified the car involved as a Peugeot.

Vidal added that cross-checking Koolen’s claim with GPS data would point to Sainz’ as the only possible car involved.

An angry Peugeot Sport boss Bruno Famin has declared the team’s intent to appeal the penalty.

“The truth is that Carlos did not hit the quad, because it was not damaged and also finished 10th in the two stages since,” argued Famin.

(Koolen finished the stage in question with the 12th-fastest time and the subsequent, most recently completed stage 10th).

“In addition, if the organisers believe there was bad behaviour on Carlos’ part, the penalty should be a monetary one.

“We can present it in the next three to four days and then it will be several weeks until the decision – if we do not go internationally. Otherwise, it’s a process that can take five to six months.

“Nobody really can understand this penalty. This leaves the door open to anything.

“If any competitor can say that he almost collided with another, we will all have a 10-minute penalty. It really is incomprehensible.”

Koolen was also displeased by the decision, arguing that the penalty was not sufficient.

“I think that 10 minutes is not enough, the penalty should be much bigger, not for Carlos but for the situation,” Koolen was quoted by Marca.

“Yesterday I said to myself that I was going to be quiet and I would not talk any more if there was a penalty, but I think 10 minutes is ridiculous.

He also refuted the Peugeot camp’s assertions regarding damage to his quad, saying that it “suffered a lot of damage.”

After the cancellation of Stage 9, which was to have taken place overnight, Dakar continues with Stage 10 from Salta to Belén tonight (AEDT).