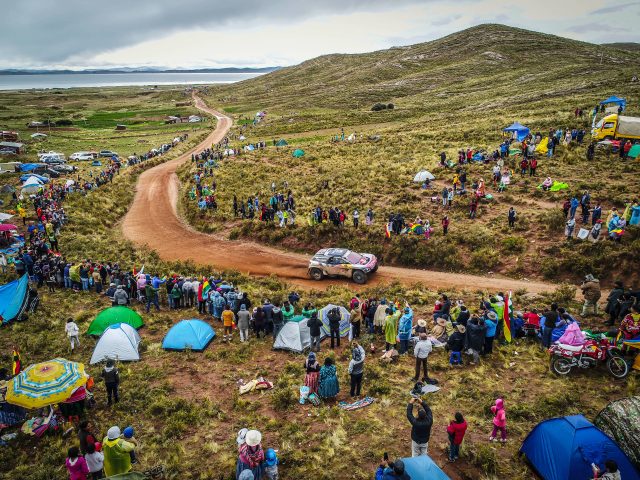 Carlos Sainz leads the Cars division of the 2018 Dakar Rally by over an hour after Stephane Peterhansel suffered badly with suspension damage on Stage 7 between La Paz and Uyuni.

Peterhansel (Team Peugeot, French) had enjoyed a lead of 27 minutes after Stage 6 and led to Waypoint 3 before disaster struck when he hit a rock while trying to pass a Quad on the muddy terrain.

The 13-time Dakar winner lost 1hr 45min repairing the left-rear suspension and radiator of his 3008 DKR and has in fact dropped to third in the general classification, behind Sainz and Nasser Al-Attiyah.

Adding to the issue is the ‘marathon stage’ status of Stages 7 and 8, with assistance from Peugeot’s crew not allowed at the overnight Uyuni bivouac.

Al-Attiyah (Toyota Gazoo, Qatari) was a couple of minutes behind his team-mate in third for the day, having recovered some of the time he lost with a slower run between the second and third waypoints. 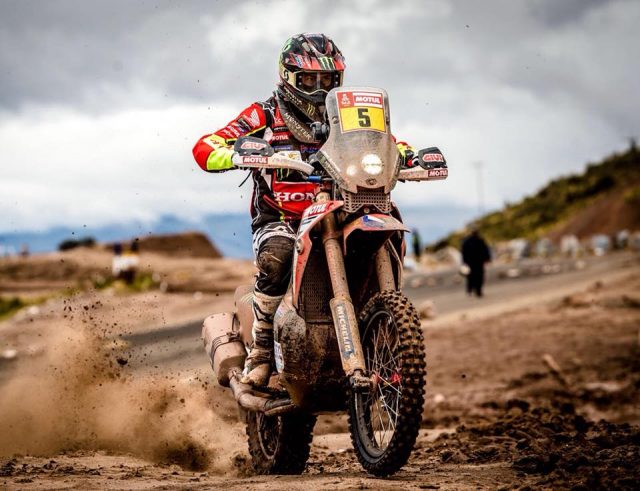 There was drama even for the Bikes stage winner, and also saw a change for the lead with Adrien van Beveren back on top after previous leader Kevin Benavides finished the stage with the third-fastest time.

However, the stage victory could be the 34-year-old’s last of the 2018 Dakar after he revealed that he may have broken his knee.

“I started the stage all guns blazing and everything was going well, but around kilometre 300 I went off-track and had a nasty fall,” recounted Barreda Bort.

“I think I broke my knee, and from then the pain made me slow down. Now it’s time to see what we can do about it, but it’s looking really bad.

“I’m sure it’s broken, my knee is out of whack and I can’t even put my foot on the floor.”

Toby Price (KTM Official, Australian) finished the stage with the fourth quickest time, rising to fifth in the general classification but with an increased gap to the lead of 13:34s.

Rodney Faggotter (Yamaha Official, Australian) is 23rd while Scott Britnell’s (Grit KTM, Australian) has not yet registered at stage finish.

Stage 8 on Sunday (local time) is the longest of the rally with 498km special for Cars and Bikes between Uyuni and Tupiza.