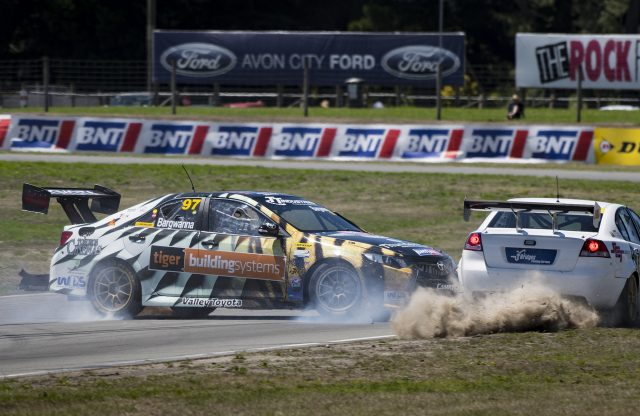 Andre Heimgartner has hit back from an overnight penalty to win the final two BNT V8s races on a day of drama at Ruapuna Park.

Heimgartner lost his Race 1 win when he was later issued a 10-second penalty for jumping the start, the #71 Superlux Camry driver relegated to third behind Jason Bargwanna and Nick Ross.

Race 2 commenced with a rolling start which saw Ross hit the rear of Bargwanna and ricochet into the infield as they swept off the main straight.

He managed to catch the #007 Total Altima as he slid back onto the track between second-placed Bargwanna and fourth-placed Jack Smith, avoiding a bigger incident. 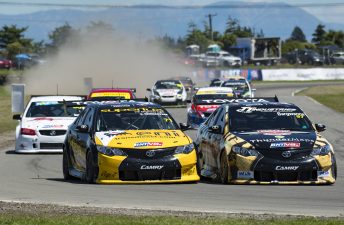 Bargwanna put the #97 Tiger Camry into the lead before the end of the opening lap and got over a second ahead before Heimgartner and Smith caught up by Lap 8.

A Heimgartner error allowed Smith to get through and he was soon applying serious pressure to the race leader.

Both ended up spinning on the penultimate lap when Bargwanna attempted to cover the #85 Pilot Brewery Commodore on the run to the final corner after Smith had already made an overlap.

The wild incident (pictured top) gifted the win to Heimgartner, from Ross and Smith.

Liam MacDonald (#69 Speedy Signs Falcon) won Class 2 while Bargwanna was stuck in the sand and recorded a DNF.

The reverse grid/handicap start to Race 3 caught out Smith, who took his cue from the starting lights which applied to the Class 2 cars only and bolted away from the Class 1 bunch.

Brock Timperley (#59 Erosion Control Falcon) and MacDonald spent time in the lead before Smith ran them down.

The 2017 Kumho V8 Touring Car Series winner provisionally held the advantage until pulling his by-then smoky Commodore off the track on Lap 8.

Heimgartner again inherited the lead having executed a brave move around the outside of his Richards Team Motorsport team-mate Bargwanna on the run to Turn 1 earlier in the lap.

The Nissan Motorsport Supercars recruit pulled away in the remaining four laps, with Bargwanna finishing second and Ross third.

Justin Ashwell (#11 Digga Falcon) was officially the Class 2 race winner after a penalty was issued to Chelsea Herbert (#62 MTF Falcon) for hitting Timperley.

Heimgartner’s results earn him the round win and see him take over the championship lead from Bargwanna.

“Coming here I was looking forward to applying some things I have learnt in the break.

“My driving feels as strong as I’ve been and preparing for the upcoming Supercars season in Australia.”

Round 4 is at Teretonga Park in Invercargill next weekend (January 19-21).