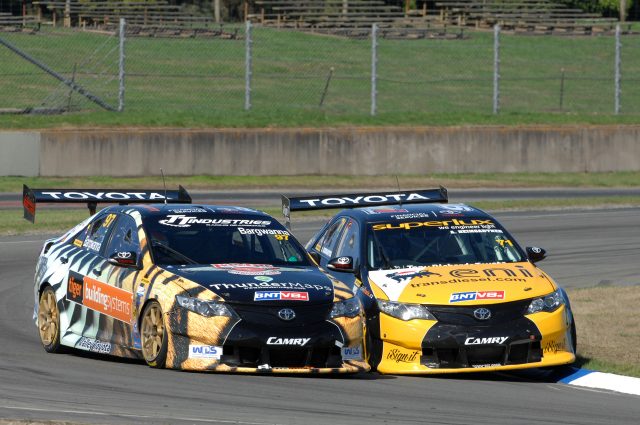 UPDATE: Heimgartner was later issued a 10-second post-race penalty for a jumpstart which put him back to third position, behind Bargwanna and Ross

Andre Heimgartner has fought back from a first-corner off to win the opening race of Round 3 of the BNT V8s at Mike Pero Motorsport Park in Christchurch.

Having taken pole earlier in the day, Heimgartner locked up his #71 Superlux Camry at the first corner and ran into the grass at the front of the 11-car field.

He wasn’t alone, with Matthew Tubbs (#42 JumpFlex Commodore) having an even bigger moment and nudging the barriers.

The #84 Hamilton Asphalts Commodore spun on Lap 2, though outside footage was inconclusive as to whether Heimgartner was involved.

Jack Smith (#85 Pilot Brewery Commodore) spun Nick Ross (#007 Total Altima) a lap later as he tried to find a way past and into second position.

Heimgartner soon made his move into second before a Safety Car for a stranded Tubbs wiped out Bargwanna’s five-second lead. 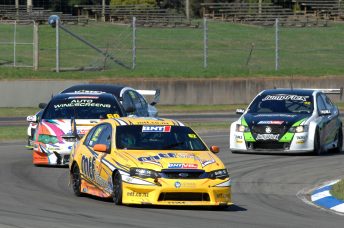 Upon restart, Heimgartner pressured Bargwanna, the two touching as he forced his way through shortly after.

“We had new front brake pads in the car, and it bit a lot harder than I would have thought, so that was bit of an eye opener,” explained Heimgartner of his early off.

“On the restart I managed to stay with Jason, and put it down the inside through Turn 1.

“We made a bit of light contact, we both lost mirrors but we both came through okay.

“The car seems pretty pacey, we’ll come back tomorrow and see what we can do for the last two races.”

Chelsea Herbert (#62 MTF Falcon) won Class 2 in fifth outright while Smith crossed the finish line in ninth position after serving a drive-through for the Ross incident.

There will be two further races tomorrow at Ruapuna Park.