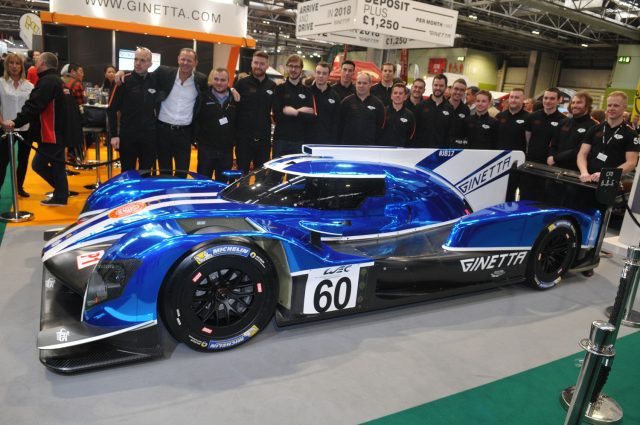 Ginetta has taken the wraps off its LMP1 challenger that will race in the World Endurance Championship and Le Mans 24 Hours this year.

The British marque announced its intention to enter sportscar racing’s top flight at the start of 2017, and its creation broke cover at Autosport International on Thursday morning.

The G60-LT-P1, which Ginetta claims is the “most advanced car in the company’s history”, produces approximately 650bhp with its 3.4-litre V6 Mecachrome engine, and has a top speed of 225mph.

Manor has already committed to running one of the new cars in the 2018/19 WEC superseason, while Ginetta says it has had a further three orders from an as-yet undisclosed team.

A total of 10 cars will be built in the initial production run, although the firm is open to building more subject to demand.

“It will be technically viable hopefully for up to four years.

“In terms of performance, we know the car is going to be right at the front.

“Toyota did a 3m14s qualifying lap [at Le Mans], so we’ve designed the car to be competitive with them.

“The target is outright victory at Le Mans and in the WEC.”

Ginetta will form part of a privateer LMP1 resurgence in 2018, joining BR Engineering/Dallara and ByKolles in taking the fight to the sole remaining manufacturer entry Toyota.

LMP2 constructor ORECA is also expected to return to the top division in an alliance with Rebellion Racing, which has already confirmed its intention to return to LMP1 after a single season in LMP2.