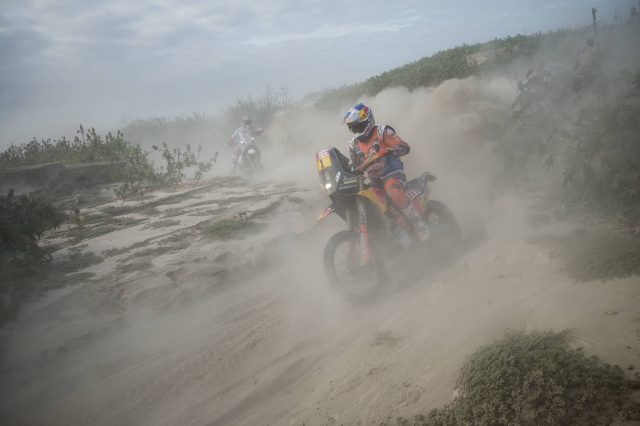 Sam Sunderland prior to his crash

Sam Sunderland’s Dakar title defence is over after crashing out of the fourth stage of this year’s edition.

On a dramatic day in both Bikes and Cars (below), Adrian van Beveren (Yamaha Official, French) took over the lead in the former by setting the fastest time on the 330km of special stage running through the sand around San Juan de Marcona in Peru.

Sunderland (KTM Official, British), who had led the rally with two stage wins from the first three, needed to be evacuated by helicopter and has been forced out due to a back injury.

Quintanilla had finished fourth in the stage and Benavides eighth.

Joan Barreda Bort (Honda Team, Spanish) level-pegged with van Beveren for much of the day and even led to Waypoint 4 but gave up 10 minutes late in the stage.

Sunderland’s exit means that Barreda Bort, who led after Stage 2, is still a little over 22 minutes from the lead following his navigational error on Stage 3.

Xavier de Soultrait (Yamaha Official, French) ended up being van Beveren’s nearest rival but took 5:01s longer to complete his run and is fifth in the general classification.

Toby Price (KTM Official, Australian) is a position behind having drifted slightly further from the lead, finishing 15th on the stage after a difficult end to the day. 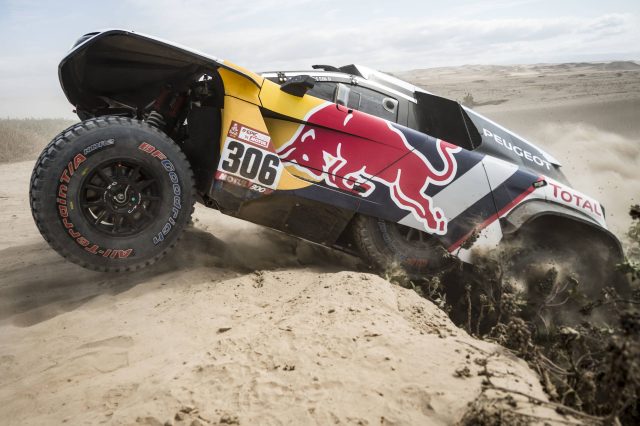 Peugeot has taken a firm hold on the 2018 Dakar as Toyota’s Nasser Al-Attiyah’s luck turned back to the negative.

Loeb took honours on the longest day of the rally so far, despite his misgivings about additional sand dune stages this year, beating Sainz by 1:35s.

Peterhansel, who was the only other driver to lead all day, extended his general classification lead after trouble for the fourth factory Peugeot driver Cyril Despres.

Despres (Team Peugeot, French), second position after Stage 3, is set to drop out of the rally after hitting a rock and breaking his 3008DKR Maxi’s right-rear suspension.

Al-Attiyah’s day was better but torrid nonetheless after he twice stopped for long periods.

“It was a very difficult day. We had two flat tyres at the beginning and afterwards we took care because we didn’t have any spares,” he recounted.

“At the first dunes, we went into a big hole and got stuck for thirty minutes, before it happened a second time.”

Nani Roma’s (X-Raid Mini, Spanish) retirement from the event has also been confirmed following a rollover on Stage 3.

According to Spanish sports newspaper AS, Roma has been cleared of serious injury despite being hospitalised with head and vertebra trauma.

He and co-driver Alex Haro, who was uninjured, are on their way back to Spain.