Sunderland back on top after Dakar Stage 3

Sunderland back on top after Dakar Stage 3 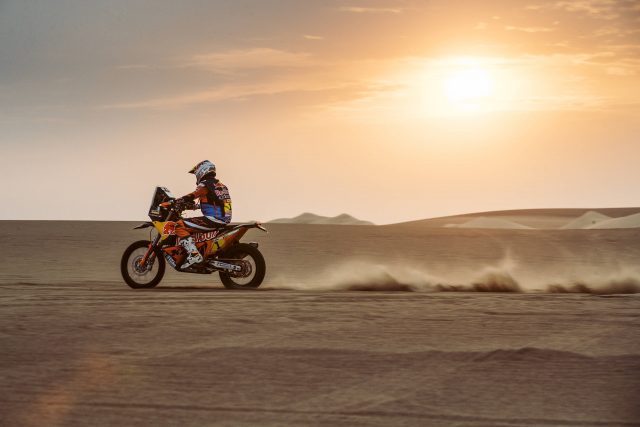 Sam Sunderland has returned to the top of the Bikes classification with a win in Stage 3 of the Dakar Rally.

Sunderland (KTM Factory, British) was quick through the first three waypoints of the 296km special stage, setting up his second stage win of the rally.

Kevin Benavides (Honda Team, Argentinean) was second-fastest on the day and moved up to the same position in the general classification by 4:38s, from seventh the day before.

Pablo Quintanilla (Husqvarna Factory, Chilean) looked like taking out the stage and with it perhaps the overall lead but lost time late on and is now an even five minutes behind Sunderland.

UPDATED: Price’s (KTM Official, Australian) performance on the dunes between Pisco and San Juan de Marcona, where he was third-fastest, moved him up to fourth in the general classification.

A five-minute penalty was put against the Australian’s name after the stage had finished, which dropped the 2016 champion to eighth and over 12 minutes behind Sunderland, but has since been removed.

Previous leader Joan Barreda Bort (Honda Team, Spanish) dumped nearly 28 minutes due to a navigational error towards the end of the stage and is now 22:45s off the lead of the rally. 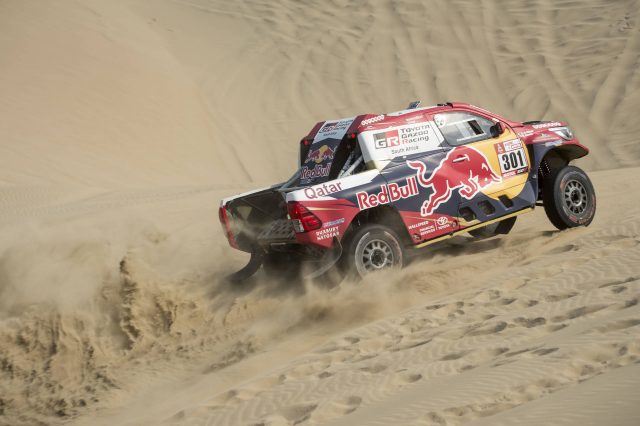 Nasser Al-Attiyah put a poor second day behind him to hit back and win Stage 3 in the Cars.

Al-Attiyah (Toyota Gazoo, Qatari) was fastest for most of the stage and moves from fifth to third in the general classification, now 7:43s off the lead instead of over 12 minutes, despite reporting another flat tyre.

“We lost around three minutes, but it was not a big deal,” Al-Attiyah said of the flat.

“We won the stage, which was good. We needed to push, but not really crazily.

“It was not a big push, because the road really isn’t easy and very dangerous in places. It was a good performance and I’m quite happy to win.”

Stephane Peterhansel (Team Peugeot, French) took over the lead of the rally with the second-fastest time on Stage 3.

The back-to-back defending champion was satisfied with a measured performance, explaining that, “We did not drive the stage on full attack; just with a good speed, but never on full attack.”

Peterhansel overtook his team-mate Cyril Despres (Team Peugeot, French), who was third on the day.

The other two factory Peugeots are Sebastien Loeb in fourth and Carlos Sainz in sixth in the general classification.

Loeb (Team Peugeot, French) is just over 10 minutes off the pace and was fifth-fastest on Stage 3 despite expressing more pessimism about his ability to deal with the dunes, while Sainz’ (Team Peugeot) position is an improvement of two places relative to the day prior.

Nani Roma (X-Raid Mini, Spanish) has been hospitalised with head and vertebra trauma after rolling his John Cooper Works car.

The incident occurred inside the final kilometre of the special stage and while Roma managed to make the finish of the timed section, he did not progress all the way to San Juan de Marcona and is therefore likely out of the rally in any event.

Stage 4 on Tuesday (local time) will be the longest of the rally so far, with 330km of special stage running out of a total of 444km, staying around the Peruvian port town of San Juan de Marcona.