Price: Starting Dakar ‘a win in itself’

Price: Starting Dakar ‘a win in itself’ 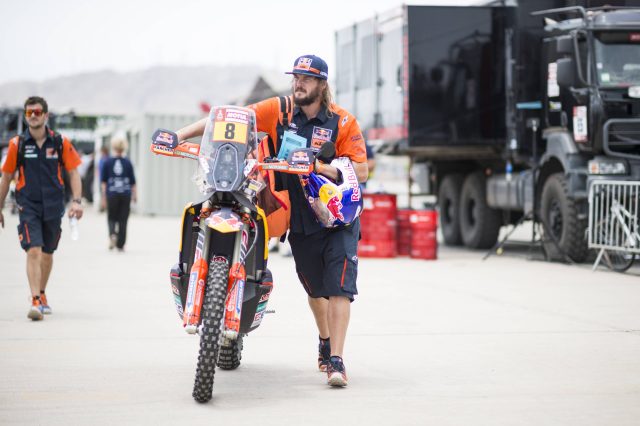 Toby Price has expressed his relief to simply be back on a bike in a rally after completing the opening day of the 2018 Dakar Rally.

The running was his first in Dakar since badly breaking his left femur in last year’s edition, an injury which also cost him the chance to defend his Bikes title in the Tatts Finke Desert Race.

“The monkey is finally off my back,” Price tweeted after the 31km special stage.

“I’ve completed my first competitive rally stage which has been more than a year in the making!

“The feeling of been back on the bike racing is a win in itself for me.

Sunderland was positive but reserved about his result, with the Brit leading the general classification by 33 seconds over Yamaha’s Adrien van Beveren.

“Yeah, it’s a race, no?” Sunderland responded when asked if he was pushing hard on the opening stage.

“It’s Day 1 of 14 so I try to pay attention to the dangers but I feel good, I feel strong, and the bike’s working really well.

Riders will spend more time in competitive running on Sunday’s loop around Pisco with 12km of liaison and a 267km long special stage, the majority of which will again be spent on sand.