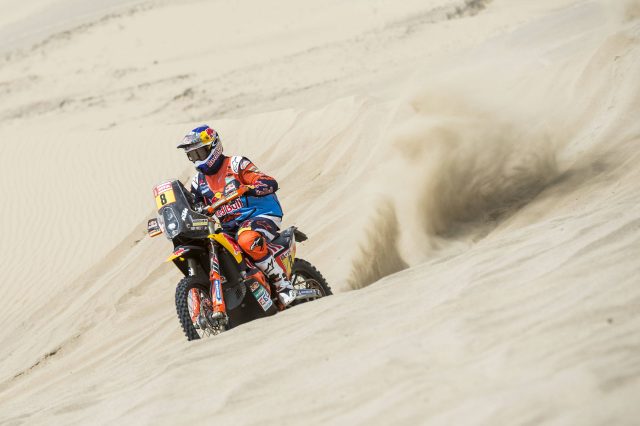 Toby Price has given up more than three minutes to defending champion Sam Sunderland on Day 1 of the 2018 Dakar Rally in Peru. 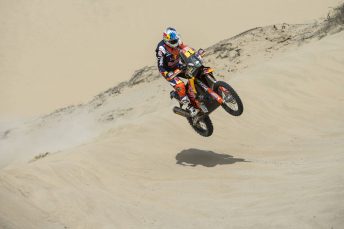 The 28-year-old’s efforts in the sand dunes allowed him to overcome next-best Adrien van Beveren (Yamaha Official, French) by 32 seconds, with Pablo Quintanilla (Husqvarna Factory, Chilean) 55 seconds off the pace in third position.

Price (KTM Factory, Australian), however, was a full 3:20s behind his team-mate in 14th position.

He still fared better than Joaquim Rodrigues (Hero Motorsports, Portuguese), who was evacuated by helicopter after crashing off a dune. 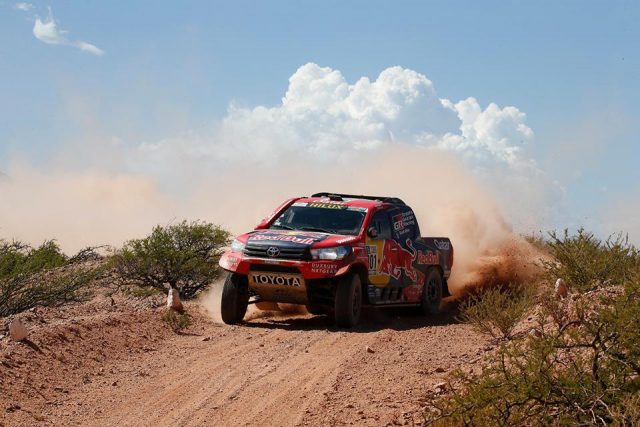 While there was talk of strategic plays to avoid being first out on Sunday’s Stage 2, Al-Attiyah seemed to be having none of it as he covered the 31km in 21:51s.

“I don’t want a strategy because I trust my co-driver Matthieu (Baumel),” Al-Attiyah explained.

“Tomorrow, if we open the road, I know it will be very difficult, but I’m just really happy for today.

“Tomorrow’s another day. We try to do our best.”

Peugeot did not have a representative in the top 10.

Stephane Peterhansel (Team Peugeot, French), who was the first car on the road, began his Dakar defence with the 11th-fastest time, 2:15s slower than Al-Attiyah.

Loeb (Team Peugeot, French) is a full 5:37s down on the leader after brake failure just 3km into the stage.

“I lost the brakes after 3km and then I had to go very slow,” Loeb reported.

“It’s quite tricky, it was a lot of downhill behind the crests in the dunes, so without brakes it’s complicated. I didn’t take risks, I wanted to finish the stage.

“It’s not how we wanted to start, but on another side we didn’t want to open the road tomorrow and now for sure we don’t open the road,” he laughed, “but I think I lost maybe too much time.”

Crews will face more dune running on Sunday (local time) with 267 competitive kilometres out of a total 279km loop around Pisco.