The logo which Craig Lowndes will race under in 2018 has been revealed. 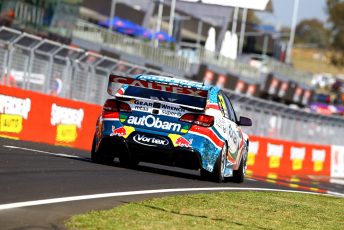 Autobarn will be more prominent on car #888 next year

Lowndes will continue in the third Triple Eight Race Engineering entry this year but will do so with major sponsorship from automotive retailer Autobarn after Caltex’s decision to step back to a minor role.

The entry will be known as Autobarn Lowndes Racing, though the Supercars veteran has no formal equity in the operation.

Autobarn has signed on as title sponsor for two years, matching the length of Lowndes’ latest contract with Triple Eight.

The team will launch its 2018 campaign, in which Lowndes will race a ZB Commodore, on January 31.

Autobarn has previously backed Rod Nash Racing in its guise as a single-car Holden team in the mid-2000s before moving to the then-HSV Dealer Team in 2008 and Walkinshaw Racing in 2009.

CLICK HERE for Lowndes’ thoughts on the Autobarn deal.