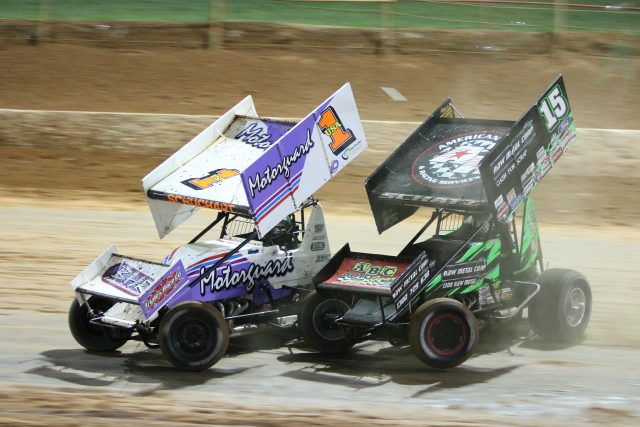 The start of Donny Schatz’ spin as he attempted to pass Logan Schuchart for the lead pic: Matthew Paul Photography

Logan Schuchart has collected a second feature win in three races in Round 10 of the East Coast Logistics Sprintcar Track Championship at Ausdeck Patios Archerfield Speedway.

The pole-sitter had established a considerable lead but that was whittled away by Donny Schatz in the latter half of the race.

Schatz, who came from ninth on the starting grid, went for a move at Turn 1 with 10 laps remaining but was pinched up on the inside of the track and swapped ends.

Schuchart’s progression to the chequered flag was comfortable thereafter, with West Australian Kaiden Manders the runner-up and Lucas Wolfe on the final step of the podium.

Mitchell Gee managed to take sixth position after starting 19th, while Schatz’ path back from the rear of the field ended with an eighth-position finish.