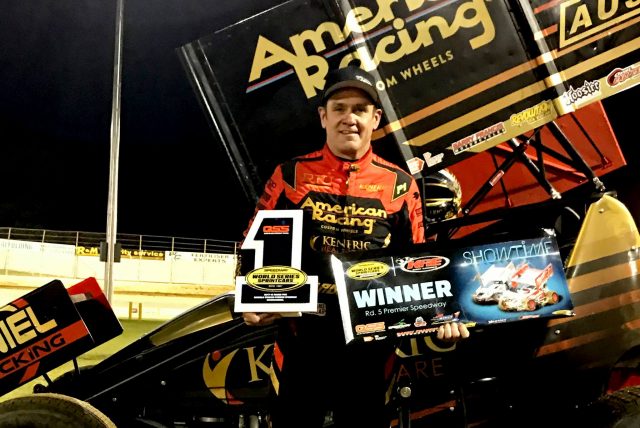 Kerry Madsen has taken out Speedweek after surviving an early incident to win Round 5 of QSS World Series Sprintcars at Premier Speedway in Warrnambool.

Madsen took the early lead from the outside of the front row before the race’s pivotal moment inside the first two laps.

Ryan Jones had stopped at Turn 4 with an engine failure, with the top two of Madsen and then-points leader James McFadden coming around again.

McFadden stalled as he hit the brakes while also pushing Madsen into the rear of Jones’ car, putting him to the back of the field.

Madsen remained in front for much of the race before Jamie Veal made his move in the latter stages.

However, just as soon as Veal had moved into first position, Jye O’Keeffe necessitated a Caution which saw the order revert to that of the end of the previous lap.

Madsen did not waste his reprieve as he was able to hold off Veal for the final six laps, while Cory Eliason finished third and McFadden got as far back as eighth by the end.

“That was such a shame for James to lose out like that because I think they had the car to beat, and he really deserves the win after a great week, but we’re happy to be up here and I’m very thankful to my crew who consistently give me a great car,” said Madsen.