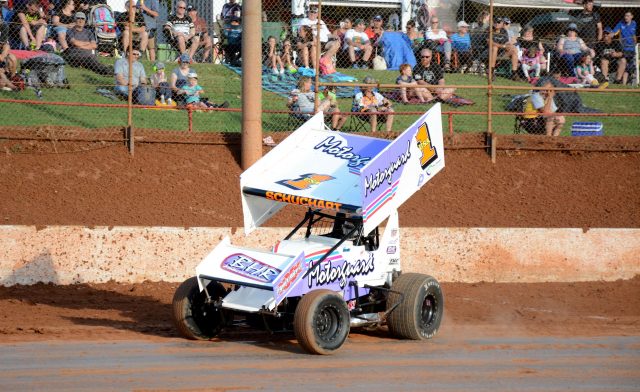 Schuchart started the feature from pole in the event which was postponed by two nights after a washout on Boxing Day.

Schatz started from third but quickly moved his way into the lead, where he and Schuchart waged a private battle.

A Lap 9 crash for Brent Kratzmann brought about a restart but the Americans remained in control at the front until the race was neutralised a second time when Brock Dean came to grief at Turn 1 shortly after.

Schuchart, who continued to run a high line, finally passed Schatz on Lap 20 and managed to put some lapped traffic between he and the World of Outlaws champion.

His advantage was all but wiped out when Andrew Scheuerle tipped over on Lap 24 and was hit by Callum Walker, but Schuchart survived the final 11 laps to take victory.

Luke Oldfield rounded out the podium having prevailed in a duel with Bryan Mann, who eventually finished sixth.