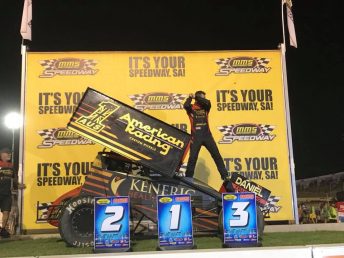 Kerry Madsen has drawn first blood in the 2017/18 QSS World Series Sprintcars with victory in Round 1 at Murray Bridge.

Starting from the third row, Madsen battled with Jamie Veal and Luke Dillon before taking the lead prior to the halfway mark.

James McFadden completed the top five, driving from 11th on the grid.

He survived an incident with Veal at the halfway mark when the two made contact and spun, while Veal had to restart at the back of the field and was lapped by Madsen shortly before the end.

Front row starter Jye O’Keefe’s A Main race came to an early end when the Warrnambool youngster hit the wall at the first corner and rolled.