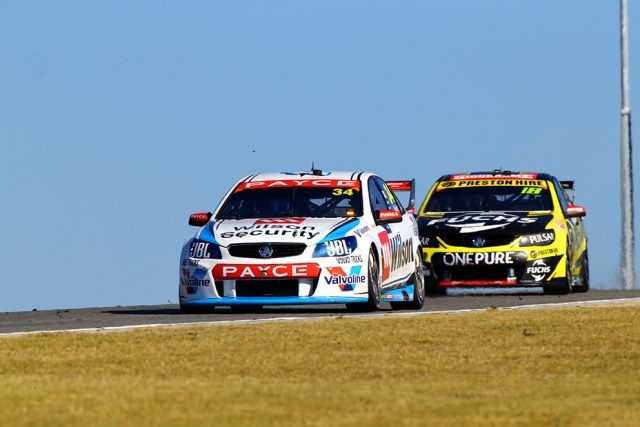 Qualifying traffic has been a particular issue in Perth

Supercars will implement a multi-part qualifying system at two events next year in order to reduce traffic on its shortest circuits.

The SuperSprints at Symmons Plains and Barbagallo, both of which are only 2.4km long, will be run with the new format.

Qualifying for each of the Saturday race and Sunday race will officially be broken into three parts as part of the format announced on Supercars’ official website.

However, practice times will determine the starters for Q1.

For Saturday qualifying, the top 10 from combined Friday practice results will earn a bye directly to Q2.

For Sunday qualifying, an additional 20-minute practice session will be held in the morning to determine the 10 which skip the first portion of qualifying.

The rest of the format is identical from Saturday to Sunday, with the bottom 16 from practice (plus extras should Barbagallo again be a potential wildcard SuperSprint) running in Q1, a 10-minute session.

Q2 will feature the top 10 from practice and top six from Q1 in another 10-minute hit-out.

Q3 will feature the top 10 from Q2 to finalise the grid over another 10 minutes.

Each qualifying session will be separated by five minutes.

An extra set of tyres will be available for both events, with the ‘handback’ to be done so before Saturday qualifying.

The splitting of the field mimics MotoGP, in which the top 10 from combined Free Practice sessions 1, 2, and 3, advance directly to the second of two parts of qualifying, joined by the top two from Q1.

Formula 1 employs a system whereby all cars start Q1 and the slowest drivers progressively drop out before the fastest 10 contest Q3.

“We’ve had issues at Symmons Plains and Barbagallo, which have been a function of the circuit length and the amount of cars,” Supercars sporting and technical director David Stuart told the category’s official website.

“The aim has been to try and reduce the amount of traffic on track, which lessens the chances of those issues reoccurring.

“We looked at the way MotoGP and Formula 1 do things and we’ve come up with a combination of both.”

The format could be introduced to other tracks if it is deemed successful.

Barbagallo in particular has been marred by qualifying near-misses over the years, with Simona de Silvestro notably penalised for her part in an incident during which Shane van Gisbergen had to dive to the grass at the bottom of the back straight in May.

The new qualifying system for Symmons Plains and Barbagallo