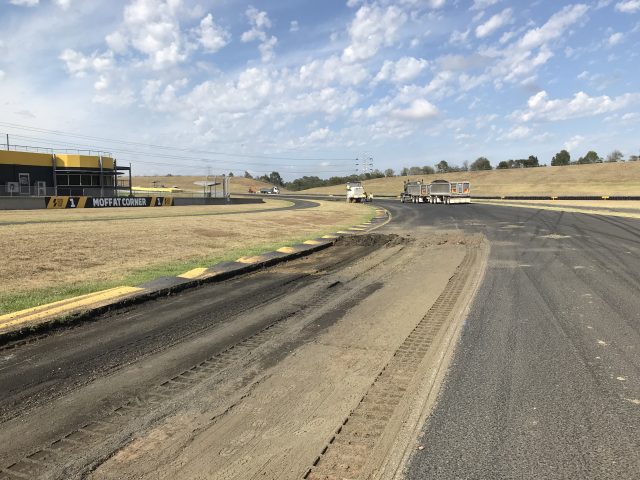 A resurfacing of Sydney Motorsport Park’s fast first corner is one of a number of improvements taking place at the circuit over the new year period.

The race track itself and an internal road will be upgraded before the Western Sydney circuit reopens in mid-January.

A full resurface from halfway along the main straight and through Moffat Corner, to which Turn 1 was renamed in October, is in progress.

The ripple strips on the right-hand-side of the corner will also be replaced.

At Turn 7, the circuit will be milled in order to remove a bump which exists where the 2012 circuit extension leaves the original layout.

That change affects the Brabham Circuit and Amaroo (South) Circuit configurations but not the traditional Gardner GP Circuit which continues to wrap around Corporate Hill.

Drainage improvements are being undertaken around the race track.

The internal road from Gate A to the tunnel is also being resurfaced, with a footpath to be constructed alongside.

The circuit will reopen on January 18 before the Free Wheel Festival on Sunday January 28, which included the opportunity to walk the track and inspect the new surface firsthand.

A test day for the new Porsche Carrera Cup cars will be one of the first driving events back on the circuit on January 24, while Supercars will race under lights in the Red Rooster Sydney SuperNight 300 on August 4.