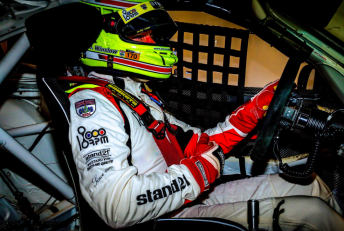 The reigning FRD LMP3 champion and two-time Australian Formula 3 title winner has been transferred to a hospital in Abu Dhabi after his GRAFF Ligier LMP3 suffered an apparent brake failure at the end of the back straight.

Winslow was able to climb from the wreckage under his own power before he passed out and was taken to hospital, where he was diagnosed with a fractured L3 vertebrae, heavy bruising to his chest and ribs, and a concussion.

The Australia-based Brit was sharing the car with Australians John Corbett and Neale Muston.

“I passed out at the side of the car, once I got out the passenger side, as the car went under the barriers,” Winslow told Speedcafe.com.

“I’m in hospital now with a fractured L3 vertebrae and heavy bruising to chest ribs and concussion.

“Thank god for F1 safety and the state of the track with regards to safety.”

Winslow is expected to remain in hospital while further tests are carried out.

The Gulf 12 Hours was won by the Kessel Racing Ferrari 488 GT3 of Michael Broniszewski, Davide Rigon and Miguel Molina.