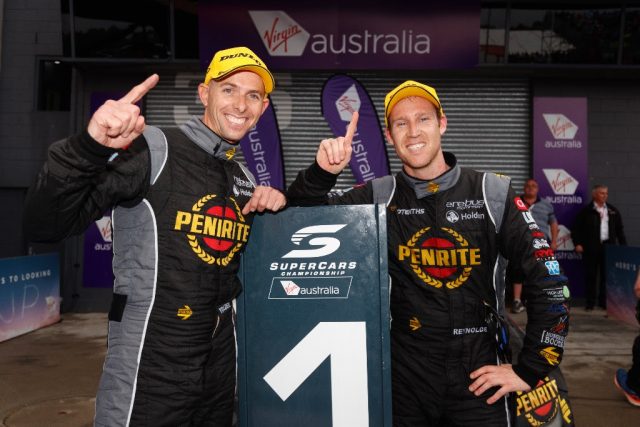 Youlden and David Reynolds combined to achieve their and the team’s maiden victories in The Great Race this year.

The former impressed in the Bathurst rain in his first enduro campaign since being dropped by DJR Team Penske, having also won his qualifying race at the Wilson Security Sandown 500.

Youlden expressed his delight at the opportunity to help Erebus and Reynolds defend their Supercheap Auto Bathurst 1000 crown.

“I’m stoked to have re-signed with the team,” said the 39-year-old.

“Erebus give me the best chance to go back-to-back and I think the car will be even stronger next year.

“Having won this year, it’s definitely given me even greater motivation, I’ll be pushing twice as hard to try and win the next one.

“I’ve been here now for 12 months and I couldn’t be happier; it’s going to be another fun year and I think that atmosphere in the team is conducive to good performance.”

Youlden is one of the first few co-drivers locked in for 2018, and his signing was endorsed by Erebus General Manager Barry Ryan.

“Luke did an outstanding job this year, so it’s great to be able to get him back for another year,” said Ryan.

“He is exactly what you want inside and outside the car and we have the confidence that he will do a good job; not only is he quick, he also responds well to pressure and is very level headed.

“Dave and Luke winning Bathurst was absolutely awesome and we wouldn’t mind doing it again next year.”

While Anton de Pasquale is already locked in as the full-time driver of the team’s second Commodore, his co-driver has not yet been named.

Pither had co-driven with Dale Wood in the #99 Erebus entry this year.

Triple Eight is also aiming at fielding its V6 twin-turbo as a Bathurst 1000 wildcard, with Matt Campbell hoped to be one of the drivers.