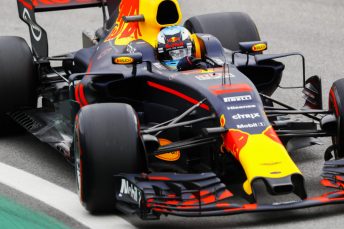 Daniel Ricciardo believes his desire to find the perfect setup ahead of qualifying proved costly during the 2017 Formula 1 season.

Though he bettered Red Bull team-mate Max Verstappen in the championship, the Australian slipped from third to fifth when compared to 2016, amassing 56 points less despite victory in Baku.

Qualifying has traditionally been a strength of Ricciardo’s but he admitted he struggled to get the most of the new generation of F1 machinery over a single lap.

“I used to be called a Saturday driver, now I feel I’m probably called a Sunday driver,” Ricciardo told Autosport. “Who would have thought?

“I’ll put it down to a couple of things. I wouldn’t say I’ve struggled with the car, but it’s been a bit trickier to maximise.

“There were a lot of laps on Saturdays… I mean I crashed twice in qualifying, which is very uncharacteristic – Australia and Baku – where it was trickier certainly.

“For whatever reason, Max didn’t find it as complicated to start the year. Naturally, I was probably too sensitive to it as well.

“A lot of the time, it was probably better to just drive it and deal with the grip I had as opposed to try and finetune it too much.”

Ricciardo said when he and his team decided to push on and avoid making too many tweaks, things started to improve but then they fell back into old routines.

“We got to a point where we thought ‘it is what it is, it won’t be the perfect car, just deal with it’,” he said.

“So I put together some good ones. Then we got perhaps stuck in our old ways, there were quite a few practices this year, especially Friday FP2 where I was on top.

“In the past, if we were quick in practice, we didn’t touch the car, we left it. We felt we had a good thing, so why change it?

“Then come qualifying, the track would evolve and we would be worse off. So we’d be caught off guard with maybe what we used to do and what used to work.

“It was a pretty big learning process this year.

“But we know the reasons now. That’s why I’m confident next year will be better.”