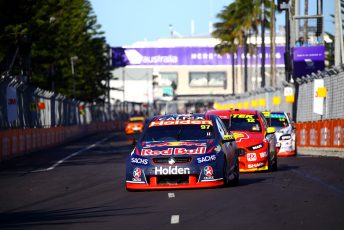 The 2017 specification Dunlop tyres played a key role in an ultimately unsuccessful title defence, according to Shane van Gisbergen.

Introduced at the start of the season in an effort to spice up the on-track action, van Gisbergen believes Dunlop’s faster rubber was a factor in the outcome of his campaign.

Though his title hopes were effectively ended after a collision with Tim Slade at pit entry at Pukekohe, a swathe of lost points earlier in the season left the Kiwi on the back foot.

“We had a lot of tyres fail and every time they did, we were in a good position so we gave away a lot of points this year which is a real shame because I think we would’ve been a contender otherwise,” van Gisbergen told the team’s website.

“The tyre was very hard to read from both a driver and an engineering point of view.

“The readings weren’t the same as the old one so as a driver you didn’t know the limits and as an engineer it was a bit harder as well.

“I made a couple of mistakes wearing them out and (Grant McPherson) probably pushed the limits as well but that’s all part of the sport, that’s how we go fast.

“You can always look back at it all with a different mindset, but in the moment you’re pushing the limit as much as you can to try and win, and in the end we were doing what we could but unfortunately it cost us quite a few points along the way.”

Dunlop introduced a new specification tyre for 2017, which featured a squarer profile, but reverted to the 2016-spec hard compound tyre for Bathurst and Pukekohe.

That came in response to a spate of failures during the two 250km races at Phillip Island in April, while there were also isolated failures at the Clipsal 500 and non-championship round at Albert Park.

A revised version of the 2016 tyre will be used for next season, with Dunlop introducing material in an effort to increase their resistance to cuts and punctures.