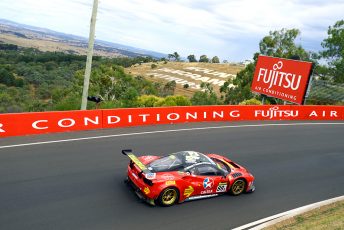 Organisers have confirmed that February’s Liqui-Moly Bathurst 12 Hour will again have live free to air television coverage across Australia.

Sunday’s race will be shown in its entirety on 7mate while coverage of Saturday afternoon’s Top 10 Shootout will also be broadcast live.

The on-screen team will be led by Mark Beretta, with Radio Le Mans’ John Hindhaugh and Graham Goodwin joined by Richard Craill in commentary.

Coverage will be simulcast online via a live stream on the Bathurst 12 Hour website, while a one-hour post-produced highlights show will also be aired following the event.

“Seven has a deep connection with Mount Panorama over more than five decades,” said Saul Shtein, Head of Sport for Seven.

“We look forward to being the network of the 12 Hour. Great drivers and great cars on one of the world’s best racing circuits. Who could ask for anything else?”

“We are very happy to continue the longstanding relationship between the Seven Network and endurance motor racing at Mount Panorama,” added Event Director John Casey.

“Seven has been a vital partner in the growth of the race in recent years and in 2018 their viewers will see possibly the best Bathurst 12 Hour grid yet.

“We continue to invest in the coverage to make it better than ever before. This year we will be adding a fourth member to the pit lane team to tell more of the amazing stories that occur throughout the race.”