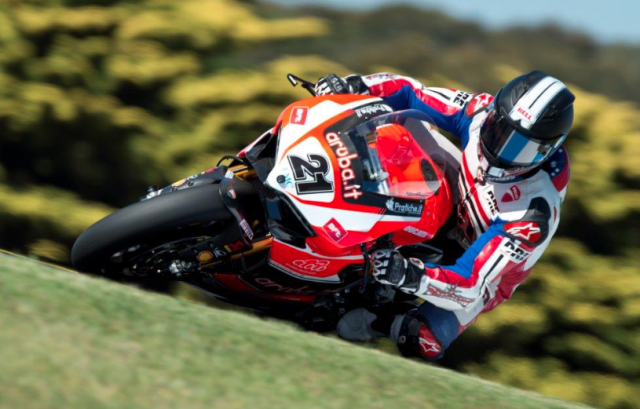 Three-time World Superbike champion Troy Bayliss is secretly preparing for a shock comeback next year in a Ducati-supported bid to win the Australian title that eluded him 20 years ago.

Speedcafe.com has uncovered details of 48-year-old Bayliss’ covert plan to make a return in the Australian Superbike Championship nearly a decade after he retired from full-time racing.

The top-secret project is aimed at reuniting him with Ducati, with which he won WBSK crowns in 2001, 2006 and 2008, in a one-bike assault on the 2018 ASBK title run by leading team boss Paul Free.

Bayliss, who co-owns the DesmoSport Ducati ASBK team, is believed to be set to field his own entry in a personal deal under the auspices of Free’s Motologic Racing, which has been synonymous with Honda’s superbike successes.

Speedcafe.com understands the veteran racer-turned-entrepreneur’s comeback for one last tilt at the ASBK trophy has the backing of the factory in Italy and the local distributor.

The proposed alliance would also be an unexpected return for Free, who in September announced his retirement after guiding Honda to multiple ASBK championships in the past 15 years.

According to sources with knowledge of the scheme, Bayliss has persuaded Free to postpone his withdrawal to help the veteran rider’s ASBK reprise after a two-decade absence.

“You’re right on the money,” an informant confirmed.

Bayliss, who took part in the new on-track motorcycle activities at the Adelaide Motorsport Festival over the weekend, was unavailable for comment, while Free could not be contacted.

However, multiple sources have confirmed to Speedcafe.com that an announcement of his audacious assault on the 2018 Yamaha Motor Finance Australian Superbike Championship is imminent.

As well as factory backing, additional commercial sponsorship has also been secured.

Gold Coast-based Bayliss last contested the ASBK in 1997, when he finished runner-up after finishing third in his debut season the year before.

Those who know him confide that he has hatched the comeback plan because he still feels he can be competitive at the national superbike level and sees an opportunity to claim the ASBK title he missed early in his career.

As a Ducati racing legend, Bayliss has had no trouble enlisting the support of the iconic motorcycle maker’s racing department and its Australian distributor Fraser Motorcycles.

As well as three WSBK titles, he won the 1999 British Superbike championship on a Ducati and also a then-rare MotoGP victory in a one-off appearance in the final race of 2006.

Taree, NSW-born Bayliss is Ducati’s second most successful WSBK rider behind four-time champion Carl Fogarty, whom he replaced in 2001.

He is third all-time in WSBK race wins – behind reigning triple consecutive world champion Jonathan Rea and Fogarty – with 52 victories.

Factory backing and the allure of working with Bayliss is understood to have clinched the involvement of Free, who defected in 2010 to orchestrate Ducati’s return to the ASBK after a 10-year absence before returning to Honda the following year.

Melbourne-based Free was the in-house boss of Honda Australia’s factory team from 2002-07, after which his Motologic enterprise ran the Japanese maker’s ASBK program as Team Honda Racing – with the exception of ’10 – until he quit at the end of this season.

Under his guidance, Honda was a perennial title contender and won five ASBK championships.

What is not clear is the role the DesmoSport Ducati team, which he co-owns, will have – if any.

The additional effort could be aligned with the existing squad but run independently by Free or compete as a standalone operation.

Bayliss’ return would begin with the ASBK pre-season test at Phillip Island from January 30-31, with the seven-event series beginning at the Island alongside the February 24-25 WSBK opener.

As well as his own comeback, Bayliss will be overseeing the nascent career of his 14-year-old son Ollie, who will be competing in a junior series run concurrently with ASBK.

Bayliss Snr quit racing at the end of 2008 after winning his third WSBK crown with Ducati.

He had a brief attempt at Supercars in 2009, co-driving Dean Fiore at Phillip Island and Bathurst without distinction.

His only racing aboard a superbike since his retirement was a two-event WSBK cameo with Ducati in early 2015, standing in for injured factory rider Davide Giugliano.

Since retiring, Bayliss has launched an events company that has staged the Sydney Motorcycle Show and the Melbourne Moto Expo.

His other venture, the Troy Bayliss Classic all-star dirt track event in his hometown of Taree, has been cancelled after five years.