Holden could stop teams from using V8 engines in 2019

Holden teams thinking of sticking with the tried-and-true V8 in the ZB Commodore rather than changing to the unproven twin-turbocharged V6 in 2019 may not get the choice.

Supercars is still undecided about whether to allow the V8-powered ZB to continue to be eligible alongside the twin turbo V6 version, which Holden wants to be the only homologated variant once it is approved.

There is even speculation that Holden will force Commodore teams to switch by blocking supplies of the Holden Motorsport five-litre V8, which is made by GM Racing in the USA.

Speedcafe.com has learned that some Holden teams are resisting the change because the HMS V8 is a well-proven motor developed to a peak over nearly two decades and also because of ownership restrictions.

The 3.6-litre twin-turbo V6, which has been co-developed by GM Racing and factory Holden team Triple Eight, will only be available to teams on an annual lease.

Although it is claimed that the scheme will save teams money because the yearly lease fee per engine includes scheduled maintenance and replacement, with no development costs, some have complained that the arrangement makes the sale of cars more complicated.

The teams will be unable to sell cars to Super2 teams with engines and a secondary lease program for second-division squads hasn’t, as far as Speedcafe.com understands, been considered yet. 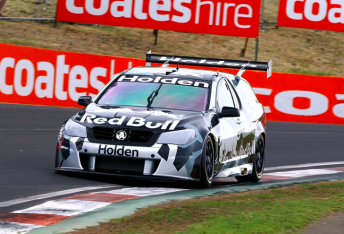 The Holden twin-turbo V6 being developed for Supercars’ Gen2 rules by Triple Eight and GM Racing is a version of the motor used in the Cadillac ATS GT3 racer.

It was due to be ready to be introduced this year along with the switch to the racing version of the new-look imported ZB Commodore, which replaces the discontinued locally produced VF next February.

But development delays and difficulties led to Triple Eight homologating the ZB with the existing five-litre V8 for next season, when it will complete development by entering a TT V6-engined version as a ‘wild card’ at selected events.

Holden is understood to be pushing for all Holden teams to adopt the TT V6 in 2019 to align with its top-spec ZB model, which is powered by a normally aspirated road-going version of the engine.

There has been talk of Holden ending availability of new supplies of the HMS V8 to hasten the transition to the TT V6 from 2019, which is the last year of the company’s current commitment to Supercars.

Although teams are able to develop and maintain the venerable V8 locally, the engines can only be bought through official Holden Motorsport channels.

The motor is a bespoke Chev-based small block five-litre V8 developed specifically for Supercars by GM Racing in Detroit.

It has a unique block and cylinder heads, which need factory replacements when worn out or modified too aggressively.

Many Holden teams have pushed cylinder head development too far or run the engines too lean, requiring frequent rebuilds or new engines.

Among the Holden teams planning to stick with the V8 after next year if allowed is Walkinshaw Andretti United, which has no interest in leasing engines via Triple Eight.

Supercars hasn’t made a determination on whether to allow the two next-gen Commodore variants – known internally as ZB A and ZB B – to race concurrently.

Supercars sporting and technical director David Stuart told Speedcafe.com that it hadn’t been decided if the twin-turbo V6-powered ZB’s homologation next year would supersede the V8 ZB’s eligibility.

However, Stuart pointed out that the homologation of all current models – VF Commodore, FG X Falcon and L33 Nissan Altima – as well as the Mercedes AMG E63 and Volvo S60 remain valid until the Next Gen/Gen2 regulations expire at the end of 2020.

“At moment, V8 ZB homologation will still stand, just as the Mercedes and Volvo homologations are still valid,” he told Speedcafe.com.

Along with the different engines, Supercars technical staff have dubbed the two ZB racers A and B because their body kits will also vary enough to warrant re-testing for aerodynamic parity.

The twin-turbo V6’s requirement for increased cooling will mean the ZB bodywork will need to be modified for extra air intakes and bonnet venting.

It was validated against the FG X Falcon and L33 Altima.

The East Sale runway is a known quantity that provided correlatable downforce and drag measurements.

“It’s long enough and good enough, and we have all the data from previous tests there,” Stuart said.