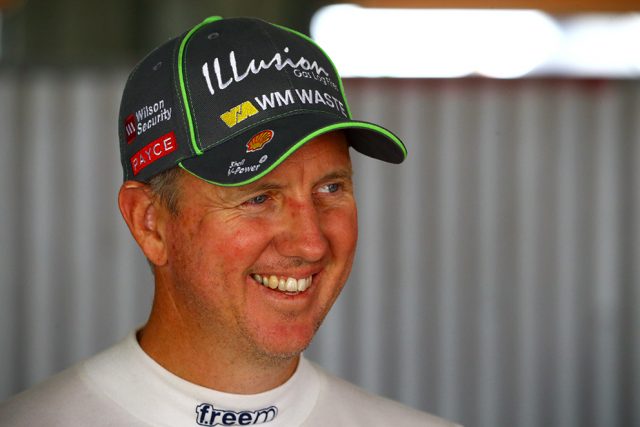 It may have taken more than two decades but victory in the 2017 Touring Car Masters title fight finally handed Steve Johnson his first national title.

After a career that took in more than 400 Supercars starts, and which saw him stand on the podium at Bathurst with Will Davison in 2007, Johnson made the switch to Touring Car Masters in 2015.

Since then he’s become one of the category’s front-runners, starting Team Johnson at the beginning of the 2017 campaign.

It proved a tough start to the season after an oil line burst on his Ford Mustang at Clipsal in March, while a strategic gamble at Darwin and a tough Queensland Raceway left him chasing John Bowe heading into the final round.

Ultimately, two wins on the final day of competition on the Newcastle streets were enough to hand Johnson an 11 point title win.

Speedcafe.com’s Mat Coch caught up with Johnson to reflect on the year. 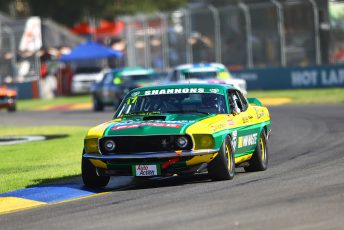 Problems at the Clipsal 500 put Johnson on the back foot

SPEEDCAFE: After such a long career in motorsport without a title, is this the piece you’ve been missing?

STEVE JOHNSON: Yeah, definitely, one hundred percent. I tried not to think about it too much because when you start thinking about it and what could happen, what couldn’t happen, you tear yourself up inside.

Even though its TCM, I think nowadays the competitiveness in this category, it’s just stepped up so much. For anyone that thinks that it’s easy to win a TCM championship is very wrong. We had a few dramas at the start of the year at Clipsal that really put us behind the eight ball, then we had more dramas at Winton, obviously not as bad as some others in that accident, but we had to come from a long way back.

SPEEDCAFE: Does it mean any more to you given you’re a Johnson, winning in a Ford, ahead of John Bowe?

JOHNSON: There’s been a lot of hype over the Johnson-Bowe TCM battles, stemming back from 2015 when I had the opportunity in John’s car. It’s just been ongoing ever since. He just seems to be getting better and better and you think that you’re going to have an easy weekend.

Even Bathurst, I thought this is our race to win here, and obviously we were really fast in qualifying and we were pretty quick in the race too, but he was right there. And I’m thinking ‘how does this 5-litre Torana hang onto the back of this 6-litre Mustang up the straight, seriously!’ They just kept lifting their game, every weekend, and we had to do the same. 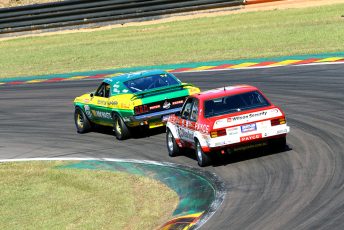 SPEEDCAFE: What was the key moment in the season for you?

The key moment for me, I think was probably Darwin. We really came back strong at Darwin and qualified on pole and we won the first race.

I actually let JB win the second race because I was more worried about getting too much rev penalty – especially coming into places like Queensland Raceway, Sandown and Bathurst. For the three race meetings after that when I rolled out of it and let him past down the straight, I’m thinking back, thinking I hope that doesn’t lose me the championship. I hope I don’t lose the championship by three points, because it was a four-point turnaround there.

Queensland Raceway was a bit of a disappointment really. I thought a home race, I could go well there, and we struggled there. We struggled to finish third even.

I think those days are the ones that really set you up for the championship, those bad days that you can make the most out of. Sandown was great, we had good pace there. Bathurst was unbelievable and Newcastle’s been an amazing Sunday. So I guess it really stems from Darwin onwards, with a little hiccup at QR.

SPEEDCAFE: Given all the success the Johnson family has had in motorsport over the decades, where does this one sit for you and the family?

JOHNSON: It’s almost, you just sit back and have a smile and you can really I guess enjoy it because I think quite a few years ago there was a lot of people who thought the Johnson name and where the team was at that stage was pretty much going to phase out, and it was going to be the next era of ownership and drivers in Supercars.

But to be able to work hard, like really hard, sacrifice more than anyone will ever know and I’ll never, ever go into it, to have something there for someone like Roger Penske to want to buy into was a massive effort from our whole family, people like Ryan Story, that really put everything into it – physically and financially – to keep it going. Roger Penske’s not going to buy a business that doesn’t look very good but on the other hand, he saw what we were doing and how hard we were working to try and keep it going.

To buy a team that was probably almost the worst team in pit lane with its books, he knew what he was buying in regards to a fan base. He knew that he was buying into a legacy and he knew that that was a massive step forward and a step up for him to get his foot into Australia on a high level straight away. I think that sure, he’s done an amazing job with the technical side of it, but you’ve got to remember that there’s still 70 to 80 percent of the people are from here, they’re not from America.

It’s very cool and to still have that, I guess that DJR brand above – and that was actually another thing, to have the DJR brand above the Penske in the logo, even things like that show how much respect Roger had for Dad, and the team and what he’d done over the last 40 years.

SPEEDCAFE: What’s it like to put the Johnson name in lights in a year when the DJR Team Penske name has also been one of the sport’s star performers?

We formed Team Johnson and instantly we’ve got a massive following on Facebook and everything, sold more merchandise than everyone put together in TCM. That’s not a lot of what I’ve done, it’s a lot of what Dad’s done, and I realise that, but for a lot of years I’ve been a part of that too. 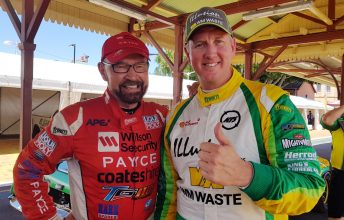 SPEEDCAFE: And to celebrate by shaking hands with JB on your cool down lap must have been pretty special too?

JOHNSON: It’s pretty cool. We did it at Queensland Raceway too a couple of years ago. I didn’t get fined then, luckily – actually I was more worried about doing a burnout because I thinking am I allowed to do a burnout or don’t I? Nah, bugger it, I’ve just won a championship, surely I can do a doughnut! The crowd loved it.

We all know it’s serious stuff racing, and there’s a lot on the line but it’s a big show too and we wouldn’t be here doing this if it wasn’t for the amazing crowd here that follows the whole motorsport industry. Even just to see the people cheering and going off when you’re doing a doughnut and smoking the tyres up is just unbelievable. They love that sort of stuff, and for me, to be able to do that, sit there, and even though you’re doing a few doughnuts, you can actually relax a little bit, look around and take it all in, it’s just an amazing feeling.