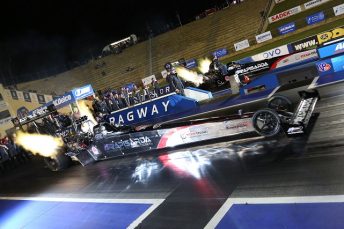 The first Top Fuel final of the season last month

The 400 Thunder Professional Drag Racing Series has pulled out of the Calder Park Australian Nationals event due to concerns about the drag strip’s surface.

Calder had been scheduled to host Round 5 of the 10-round series, featuring four categories including Top Fuel, on January 26-27.

“This has been a very difficult decision for the 400 Thunder series as we were looking forward to racing in Victoria,” said 400 Thunder General Manager Kevin Prendergast.

“However, the safety and integrity of the racing is paramount and at this stage this cannot be guaranteed.

“It is disappointing that the Calder event will not occur, however there is full support for the new 400 Thunder events at Adelaide and Perth.”

Calder had been one of three new venues to join the 2017/18 calendar, along with Adelaide and Perth.

According to a statement released by 400 Thunder, both the Pro Stock Association and Australian Top Doorslammer Association members had expressed concerns about the Victorian venue.

The series is now back to nine rounds, the same count as in 2016/17, with the next round being New Year Thunder at Willowbank Raceway on January 6.