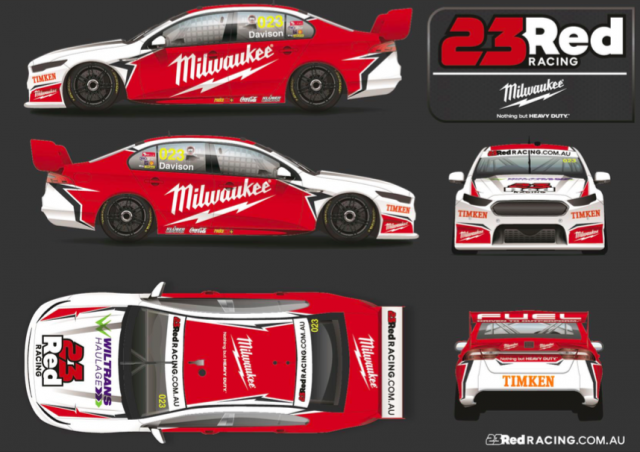 23Red Racing has revealed the livery it will run next season alongside a three-year naming rights sponsorship deal with Milwaukee Tools.

Davison will race under the banner of Milwaukee Racing following the confirmation of the team’s official partnership with the power tools manufacturer.

“With our driver locked in and corporate partnership sealed for the next three years, I’m really looking forward to starting the race year in 2018,” said team co-owner Phil Munday.

The recently purchased car, which won this year’s Sandown 500 courtesy of Cameron Waters and Richie Stanaway, will be housed in new premises at Kilsyth, Victoria, and will utilise #023 for the 2018 campaign.

Davison surveyed the team’s new base earlier this week as he begins preparations for the new season.

The former LDM operation has scaled down its Supercars effort to one car with its second Racing Entitlements Contract (REC) heading to Prodrive to run Stanaway, announced earlier this week.