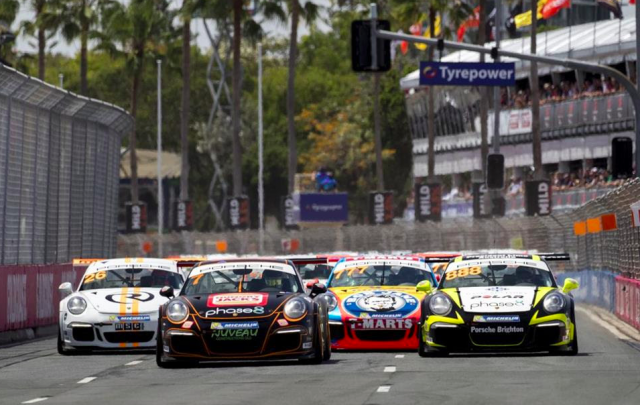 Porsche Carrera Cup will operate a revised format in 2018

Porsche Carrera Cup Australia has revealed a new venue and race formats in the release of its 2018 calendar which includes a round with counterparts from Carrera Cup Asia.

The popular one-make series, featuring a new specification car next year, has tweaked the look of the eight round series to include an expanded Endurance Cup element alongside a visit to the new Bend Motorsport Park circuit.

From next year this will increase to six longer races with the format to be rolled out at Bathurst, Gold Coast, Hidden Valley (Darwin), Phillip Island (two 45 minutes races) and at the series’ maiden visit to The Bend Motorsport Park circuit in South Australia.

This will be the third time Australia and Asian Porsche racers will do battle following successful rounds at Sydney Motorsport Park in 2016 and at Malaysia’s Sepang International Circuit this year.

The season will begin at the Adelaide 500 from March 1-4 before taking in the Formula 1 Australian Grand Prix.

It will then join the Supercars program at Phillip Island ahead of visits to Hidden Valley (Darwin), Sydney Motorsport Park, The Bend Motorsport Park, Supercheap Auto Bathurst 1000, with the final round at the Vodafone Gold Coast 600 in October.

“Carrera Cup is going from strength to strength and the announcement of the 2018 race calendar certainly adds to the anticipation of the coming season,” said Andreevski.

“We’re proud that we will not only have a fully subscribed field of Porsche 911 GT3 Cup cars on the grid in 2018, but that we will showcase our ‘sold out’ series in partnership with Wilson Security at some of the best motor racing events in the country.’

“The addition of the Endurance Cup was very well received by our customer base this season so, in addition to our strong event line-up, we can build on our endurance focus with more Endurance Cup races throughout the coming season.”

Teams will take delivery of the new specification Carrera Cup race cars during a handover event at Sydney Motorsport Park on January 24.