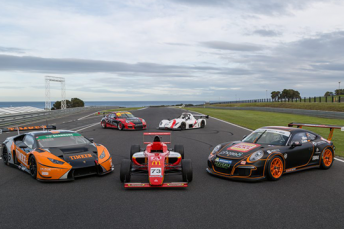 Shannons Nationals will have a six-round calendar in 2018

The Shannons Nationals series will run over six rounds next year, one down from 2017.

As previously reported, the season will kick off as the first ever national-level motorsport meeting at The Bend Motorsport Park in mid-April.

Sandown, which has previously hosted the season-opener, will serve as Round 2 in May, before the series heads to another Victorian circuit in Phillip Island in June.

Queensland Raceway sits in its customary slot one weekend after the Virgin Australia Supercars Championship event at the Ipswich circuit.

Rounds at Winton and Sydney Motorsport Park in September round out the season.

The calendar is a reduction of one round relative to this year’s campaign.

Wakefield Park, which hosted this year’s Shannons Nationals finale in November, misses out in 2018, while the second Phillip Island round has also been dropped.

“Next year is shaping up to be one of the best seasons of Shannons Nationals racing,” said series director Michael Smith.

“Shannons Nationals is going from strength to strength and we’re excited about what lies ahead at circuits around Australia from the world class, newly constructed Tailem Bend to old favourites like Phillip Island and Sydney Motorsport Park.

“We’ll also be returning to Sandown, Winton and Queensland Raceway next season and we’re anticipating plenty of action across a range of different categories.

“The future is bright for the CAMS national championships and series racing at Shannons Nationals’ rounds.”

Shannons Nationals regular Australian Production Cars will, however, hold its own round at Phillip Island in November, with the other four rounds on the CAMS-run program.

The Kumho Tyre V8 Touring Car Series will not run any rounds with Shannons Nationals for the first time in its history in 2018, opting instead for a predominantly Supercars-based calendar.

Long-term backer Shannons Insurance has also agreed to extend its backing as the naming rights sponsor of the series, taking its support past a decade.

“The Shannons Nationals are well supported and each and every year we’re seeing some great categories showcase their skills at some of the most exciting circuits in the world right here in Australia.

“We’re excited to continue work with everyone that makes the Nationals event a success, including those at CAMS.”

Aussie Racing Cars will hold one round with Shannons Nationals, and the Australian Prototype Series four of its five rounds.

A full line-up of categories is yet to be confirmed.