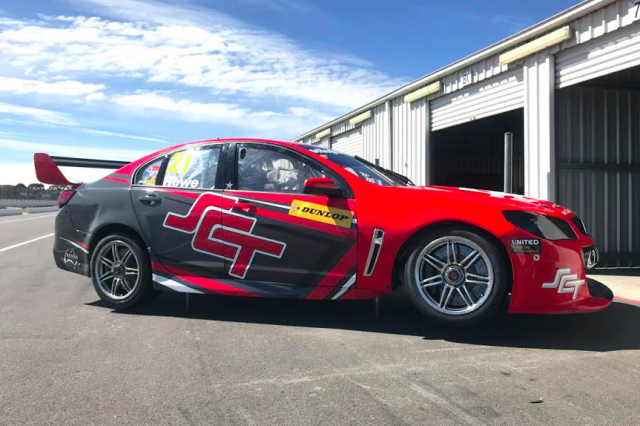 Brad Jones Racing has run its eye over a group of rising stars during an evaluation day at Winton Motor Raceway.

The outing marked his first run in a Supercar having focussed his career largely around single seaters.

“I can’t believe how much power the Supercars have,” said Rowe following the test. “I got told they wouldn’t turn like I wanted, but it did. It’s a lot of fun.

“That first session when I went out, I put the foot down and lit it up like you wouldn’t believe. It was awesome.

“There is a total different technique behind driving a Supercar. It was an eye-opening experience.

“The biggest difference between these and the F4 cars is the right foot braking.

“I ran off the road once during the day. I was pushing a little harder and the track was getting quite hot, it was hectic.

“There’s a lot to get right. You have to control the throttle a lot more, but in saying that these cars have really good power to get you out of a spot if you make a little mistake.”

He was joined by former Australian Formula 4 driver Zane Goddard, who completed 120 laps over two days in Andrew Jones’ Super2 Series Holden, as he evaluates his options for next season.

The Gold Coast teenager is contemplating a switch to touring cars following a stint in the hotly contested Formula Renault 2.0 Championship in Europe this year.

“The car is a lot different to anything I’ve driven before. I did about 120 laps overall, but it feels like a lot more,” said Goddard.

“I didn’t quite know exactly what to expect coming into the test days.

“The Supercar had better handling than I expected as I thought it would be quite heavy and slow to change direction, but it was a pleasant surprise as to how good it was. Bryce Fullwood behind the wheel of Tim Blanchard’s Commodore

“Everyone on the team was a good help, the BJR drivers were all there and gave me a few tips and pointers to help along the way and you get to see all the data which is really helpful.

“It’s been a great experience so far, so a big thanks to all the crew at Brad Jones Racing. Looking forward to seeing what’s next.”

Fullwood, who scored his first Super2 Series round podium at the Newcastle 500 finale earlier this month, has previously conducted tests with Nissan Motorsport.

The Darwin driver plans to continue in the second tier Supercars category next year but its yet to confirm which team he will drive for in 2018.

“It has been good and it is obviously very different from the Nissan Altima I have been driving,” Fullwood told Speedcafe.com.

“To work with main series engineers was good and I feel that I really learned a lot.”

The evaluation day arrives off the back of a full test day on Tuesday for its main game operation at the venue, which marked its final hit-out for the year.