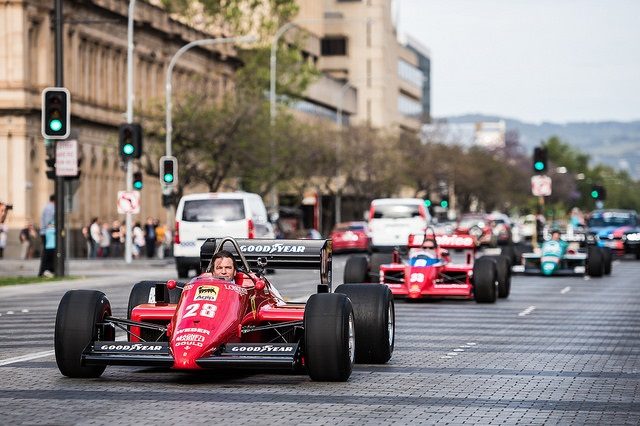 Formula 1 cars will be paraded through Adelaide city streets

A number of Supercars drivers will drive classic Formula 1 cars and other exotic machinery through city streets this Friday afternoon as part of the Adelaide Motorsport Festival.

Tim Slade and Cameron Waters are among the drivers to parade F1 cars from the Victoria Park, while Craig Lowndes will drive a 2007 Ferrari FXX and Garth Tander, the Oscar Fiorinotto-built Super5000 car.

The parade will run under police escort from the AMF precinct to the traditional Friday night Gouger Street Party nearby.

Vehicles will leave Victoria Park via Wakefield Street at 1745 local time, heading through the middle of Victoria Square and looping around via Morphett Street to join the festivities on Gouger Street.

Among the group of up to 16 cars and bikes will be Troy Bayliss on a World Superbike-specification Ducati, Nick Percat in a new McLaren 720S, and Todd Hazelwood in a fearsome 1200BHP Toyota 86.

“The Gouger Street event is a staple of not only the Adelaide Motorsport Festival and the Adelaide Rally, but a tradition that dates back for more than a decade to the original Classic Adelaide Rally,” explained Event Director Tim Possingham.

“Adelaide is one of very few places, if anywhere, in the world where the public can see incredible racing machinery, including genuine Formula 1 cars, driven through the middle of the city at peak hour.

“It is quite a remarkable sight and sound.”

The WTF 86, as it is known, is a street-legal car modified in Australia to take a 4.1L VR38 engine from a Nissan GT-R.

Slade will drive the car, which makes its public debut in Adelaide, in a match race against the 1994 Footwork Arrows FA15 driven by Josh Kean.

The Adelaide Motorsport Festival begins on Thursday December 7 with the start of the Shannons Adelaide Rally, while the Victoria Park Sprint takes place on Saturday and Sunday.