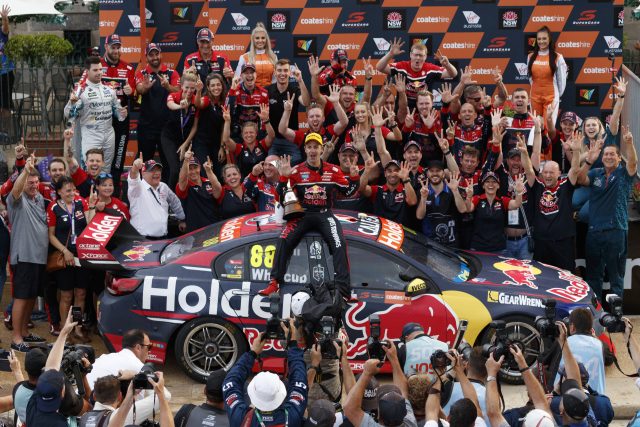 The Coates Hire Newcastle 500 provided drama by the bucket load with many hailing the title decider as one of the greatest in the championship’s history.

Read our list of contenders below and cast your vote in this week’s Pirtek Poll.

An epic season long fight between Jamie Whincup and Scott McLaughlin went down to the wire with the former coming out on top in controversial circumstances on the Newcastle streets.

Whincup headed into the final race of the year facing a 78 point deficit after a opening lap tangle with Michael Caruso and crash in Saturday’s race saw him relinquish his advantage and finish in 21st spot.

The Triple Eight driver admitted he needed a miracle to salvage his hopes after rival McLaughlin (Shell V-Power Racing) won the Saturday race.

However, the championship was turned on its head on Sunday when pole-sitter McLaughlin was left to battle his way through the pack twice after receiving penalties for pit lane speeding and turning around Simona de Silvestro.

Having managed to reach the 11th position he needed to take the title, a clash with Craig Lowndes on the penultimate lap prompted a 25 second penalty that was delivered as the chequered flag flew.

As a result, the penalty demoted McLaughlin to 18th spot handing Whincup his seventh crown.

VIDEO: The coming-together between Lowndes and McLaughlin

You can’t script this.

Courtney held a 53 point lead and the trio were occupying the top three places in Saturday’s penultimate race before a sudden rain shower hit at Sydney Olympic Park.

Winterbottom, who had briefly taken the lead, aquaplaned into the Turn 5 wall and was then followed by Whincup and Courtney, with all three suffering damage.

While Whincup and Winterbottom retired from the race, DJR managed to patch up Courtney, who finished in 15th spot, claiming valuable championship points.

Courtney then went on to score his maiden Supercars title by finishing 14th in the final race.

Rick Kelly and Craig Lowndes went into the final round separated by seven points, and over The Island’s three races, the gap remained tight, with the pair locked on equal points heading into the last race of the year.

Lowndes took the early advantage until a slight touch from Kelly’s HSV Dealer Team Commodore saw Lowndes spin into Todd Kelly before being collected by Will Davison.

Kelly copped a drive-through penalty, and even though Lowndes continued, his Falcon was too damaged to run at the front. The game was over – Kelly was the champion and Lowndes was left to rue what might have been.

As history will show, this was Lowndes’ best chance to win a title for Ford.

The Triple Eight team lodged two post-race protests against Kelly, however, on Monday afternoon, Kelly was officially instated as the series champion.

VIDEO: A controversial end to the 2006 title

Garth Tander lifted the Supercars championship with a margin of two points after coming through a tense final at Phillip Island.

The HSV Dealer Team driver managed to take out the opening two races of the weekend which saw the title race with Triple Eight’s Jamie Whincup go down to the wire for the final race.

In the end, Holden Racing Team’s Todd Kelly held off Whincup to win the final race of the season, while fourth for Tander was just enough to claim the championship.

Which Supercars’ title decider was the best? Cast your vote in this week’s Pirtek Poll.