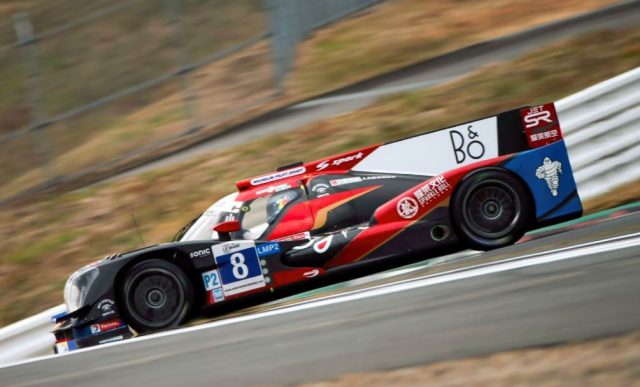 Jackie Chan DC Racing X Jota has won the second round of the Asian Le Mans Series at the 4 Hours of Fuji in Japan.

The trio of Thomas Laurent, Harrison Newey and Stephane Richelmi survived the challenge of the BBT Ligier of Anthony Xu Liu, Davide Rizzo and Pipo Derani to win the LMP2 class by just over a minute.

DC Racing #8 took the race lead at the first corner when the pole-sitting BBT entry spun and dropped to the back of the small, 15-car field.

Though it chased back in the opening hour of the race, and led during the pit stop sequence, Rizzo eventually lost out to Laurent in traffic during the final hour.

Taiwan Beer GH Motorsport had been set for an LMP3 class podium only to be forced out inside the last 20 minutes of the race.

In the GT Class, Chaz Mostert, Junsan Chen, and Jesse Krohn raced to second in the three-car field, the BMW M6 GT3 trailing home their FIST-Team AAI team-mates by 13 seconds.

The Mostert entry had been on target to record its second successive Asian Le Mans Series class win before a late stop-go penalty for a pit infringement saw Krohn fall behind team-mate Cioci in a Ferrari 488 GT3.

The only other entry in the class, Tianshi Racing Team’s Audi R8 LMS, ended the race three laps down on the two AAI entries.

The Asian Le Mans series now moves to Buriran in Thailand for its third round on January 11-13.