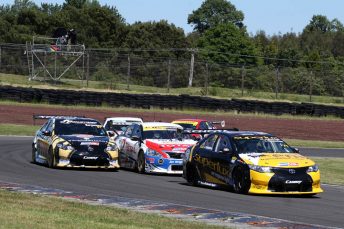 Andre Heimgartner has won the final BNT V8s race of the weekend as Jason Bargwanna sealed the overall round victory at Taupo in New Zealand.

A lightning start from Heimgartner saw the Toyota Camry driver move to the front of the Class 1 field at the opening corner in Race 3.

He then progressed to the outright lead just two laps later, easily chasing down and carving his way through the Class 2 pack.

The final race of the weekend saw the Class 2 field take the start, with an inverted Class 1 field setting off 30 seconds later.

It meant Liam MacDonald started from pole, jumping to a clear early lead.

MacDonald then held his advantage throughout the race to take his second Class 2 win of the weekend.

Making a move around the outside at the start, Heimgartner headed the Class 1 field before Turn 2.

Bargwanna and Jack Smith also moved forward well on the opening lap to hold down the class podium places.

The top two remained as they were throughout the race, while Smith, his Holden Commodore smoking, had his mirrors filled by Nick Ross for much of the encounter but resisted the pressure to claim third.

Earlier, Bargwanna put in a controlled performance to win Race 2, moving into the lead before extending that advantage throughout the 12 lap race.

He was challenged initially by Ross, who was unable to maintain the pace and had to settle for second.

Third went to Smith, demoting yesterday’s race winner Heimgartner, who saved a set of fresh tyres for the final race of the weekend, to fourth.

Saturday’s Class 2 winner Chelsea Herbert ended her race in the infield with an electrical problem, with MacDonald winning the class.

The result sees Bargwanna win the round and maintain his lead in the championship standings over Heimgartner, with the next round at Ruapuna in January.