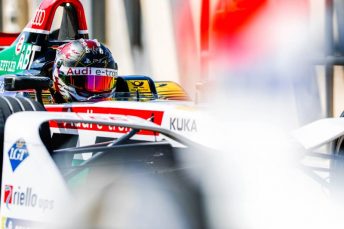 Daniel Abt has taken an unlikely race win after Edoardo Mortara spun out of the lead of Round 2 of the Formula E Championship in Hong Kong.

Having run second throughout the race, and seemingly without an answer to Mortara out front, Abt was handed the win after a mistake from the Venturi driver almost within sight of the flag.

Ironically, Mortara had also inherited the race win after pole-sitter Felix Rosenqvist spun at the first corner on the opening lap.

A failure of the light system saw the race start behind the safety car after a long hold on the grid.

Rosenqvist caught the field napping as the safety car released the pack, only to lock the rear brakes and spin at the first turn.

He then compounded his problems by running wide at Turn 2, bumping the wall on exit and shoving Luca Filippi, who had been sizing up the Swede, wide.

It left Mortara in control of the race over Abt and Mitch Evans, while Saturday race winner Sam Bird climbed his way into the top ten.

Mortara dominated the first half of the race, pitting for his second car after 24 laps.

A slow stop from Evans dropped the New Zealander down the order, promoting Rosenqvist to third having battled his way back through the field following his opening lap escapades.

It was then a measured drive to the flag for the top three, with Mortara managing a three-second advantage and Rosenqvist 11 seconds off the leader, but three seconds clear of Evans.

With the race seemingly in the bag, Mortara pushed too hard while chasing the extra point for fastest lap, locking the rear brakes at Turn 2 and dropping to third.

Victory is Abt’s first in Formula E and sees the German lead the championship by three points over Bird following the double-header round in Hong Kong.

Marrakesh in Morroco hosts the third round of the Formula E season in mid-January.