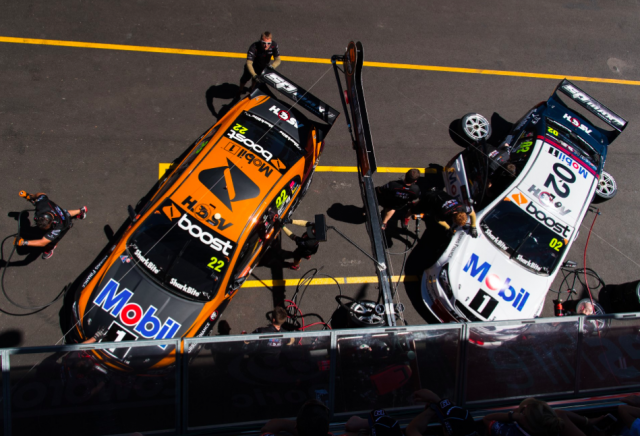 The Mobil 1 HSV Racing (Walkinshaw Andretti United) team will remain in its current base for another year pic: Daniel Kalisz

Walkinshaw Racing’s planned move to a new group headquarters has been put on hold to allow impending partners Michael Andretti and Zak Brown to have a say in the relocation.

To be restructured as Walkinshaw Andretti United from January 1, the team will stay at its existing facility for at least another year rather than move with the parent Walkinshaw Automotive Group (WAG).

WAG, which includes the HSV performance road car business, is shifting to a new standalone site across the railway line from its long-standing divided operation in an industrial park at Clayton in Melbourne’s southeast.

Ryan Walkinshaw confirmed that Walkinshaw Andretti United will remain at the current location behind HSV’s soon-to-be vacated administrative headquarters until the three-way international partnership decides what sort of base it needs for the future.

“We’re in that discussion with our new partners about what we envisage for the race team going forward,” Walkinshaw told Speedcafe.com. “We may want to build a new base.”

The lease on the existing site has been extended for another 12 months to give the new ownership group time to evaluate long-term requirements.

“We’ll change a few things around, and then by the middle of next year, we hope to have an understanding between myself, Michael Andretti and Zak Brown on what we want to do with the team,” Walkinshaw added.

“It may be that we try to find some space in the new (WAG) facility, we may decide to stay here or it may be that we move to a standalone site with its own branding and everything else.”

Among the considerations will be whether WAU will continue to need an engine shop from 2019, when Holden teams are due to switch from the tried-and-true Holden Motorsport five-litre V8 to the twin-turbocharged 3.6-litre V6 being developed by Triple Eight.

The V6s will be leased to Holden teams by GM Racing, which will control development, maintenance and replacement through Triple Eight’s engine partner KRE.

The teams either do their own development and maintenance or have it done by secondary suppliers like KRE and Walkinshaw Racing.

But if WAU decides to stick with the HMS V8 in the new-look ZB Commodore racer – if that is allowed – or changes to another make, it will want to keep or expand its engine department, which has consistently produced among the strongest motors for more than 25 years.

According to Walkinshaw, the uncertainties made it prudent to hold off on the team’s move and consult with his new partners.

“There are still a lot of balls in the air on what’s happening with engines and the category going forward and so on,” he said.

“So we felt it wasn’t wise to commit to something, spend a lot of money moving everyone and then have to change that again in 12 months if things change in the sport, as well as what we want to do in the team.

“It just made a lot more sense to have 12 months of breathing space and then we’ll be able to see more clearly what the future holds.”

Walkinshaw Racing, including its former long-running Holden Racing Team guise, has operated out of the same Clayton business park as HSV for 22 years.

It started in cramped and divided locations at the other end of the complex before moving late last decade to an integrated and more spacious facility – but still small by other top team standards – next to HSV’s headquarters.

Walkinshaw Andretti United will unveil a team logo early in the New Year that Speedcafe.com understands will reflect the heritage and ownership stakes of the three partners.

The Walkinshaw family and Andretti Autosport will own 37.5 per cent each of WAU, with Brown’s United Autosports holding the remaining 25 per cent.